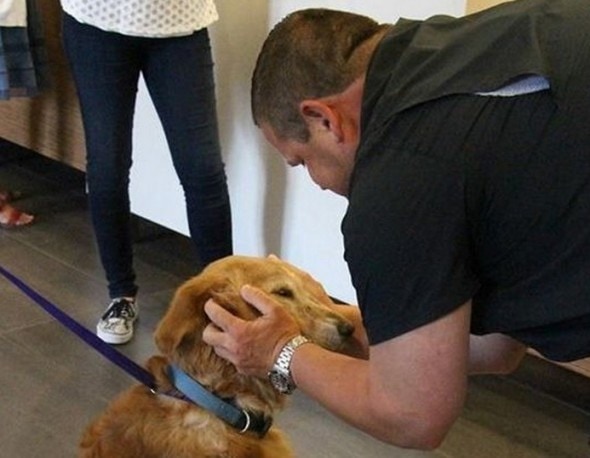 For the last ten years, Paris, named after the Texas city where she was first adopted, has been missing from her family.  She was trained as a therapy dog and sent off to a family that needed her.  Some how, she ended up part of an animal hoarding case, and her microchip brought her back to her first family, and a wonderful forever home.

“We thought we were doing something very admirable,” said Brad Galbreath, the dog’s original owner.  He and his wife, Courtney, were training Paris to be a therapy dog.  They worked with a local trainer for two years before she was ready, and knew she was a smart dog with a natural gift for therapy dog work.

After the two year training period, it was time to send Paris off to a family that needed her more.  Something that isn’t easy for anyone spending two years raising a dog.

Well,  that was the last time they thought that they’d hear about her.  However, a phone call that they got about a week ago changed everything.  They always wondered how she was doing and where she was, but never really knew.  As it turned out, thanks to the SPCA of Texas, they were about to find out.

The SPCA of Texas told Brad and his wife about how she was part of a 72 animal round up from a woman’s home.  Twenty other animals were found dead on the property that Paris was taken away from.  The owner of the property faces very heavy charges including misdemeanor animal cruelty.

Paris’ microchip is what led her first family back to her.  Due to the information on it, they were able to give her back to them, where she will spend the rest of her life with them, happy and healthy.  They even kept her toys, puppy pictures and first collars this whole time.  They were happy she had survived her ordeal.

“That curiosity is put to bed now,” Brad said.  “She’ll be with us until we ultimately say goodbye forever.”