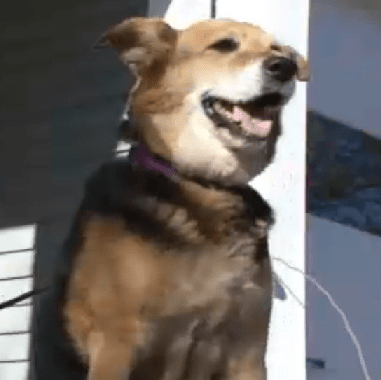 Last month we brought you the story of Trina, a survivor of Hurricane Katrina who eight years later was still looking for her forever home. Now Trina has now found the home that she has been long overdue for.

Trina was rescued with several other dogs in the aftermath of Hurricane Katrina and brought to an Ohio shelter. All the other dogs found new homes, but Trina spent the past eight years living at the shelter.

Then last month Trina’s story spread and she captured the hearts of dog lovers all over. When John and Megan Kizer heard about Trina and her long wait for a home they knew they wanted to give it to her. They had recently lost their dog and were ready to give a new dog a loving home.

“I was pretty much sold as soon as we met her,” said John.

The Kizers took Trina home with them and she is now getting used to life in a real home. She goes for frequent walks and loves playing in the leaves. For eight years in the kennel Trina never barked, but after a few days at her new home she felt comfortable enough to use her voice.

“The second or third day we had her, there was a squirrel running around on the back deck,” said John. “She saw it through the back window and let out this deep German Shepherd’s bark.”