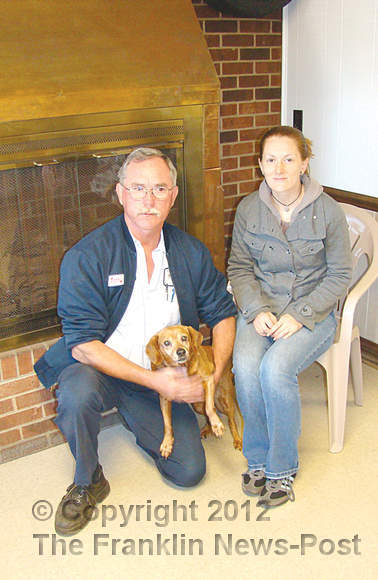 It was over 7 months ago when Tinkerbell, a 13-year-old ailing dog, went missing from her home in Boones Mill, Virginia. Her owner Terry Gusler searched daily and never gave up hope on her. A chance meeting led to Gusler’s daughter Kelli to find Tinkerbell this past weekend.

10 years ago Terry Gunsler adopted a tiny brown dog that he named Tinkerbell. Tinkerbell, along with a cat he rescued, became a regular sight at Gusler’s auto shop. Tinkerbell disappeared about 7 months ago. Gusler searched daily for Tinkerbell but with no luck. He feared that “she had gone off to die.” He couldn’t get her off his mind though and continued to hold on to hope that he’d see his Tinkerbell again. His daughter Kelli couldn’t get Tinkerbell off her mind either. “Tinkerbell was like one of us here at the shop. She’d greet the customers when they came in, and she always loved attention and a little petting to go along with it,” Kelli said.

On Saturday the Franklin County Humane Society organized a special adoption program at the Tractor Supply Company. Kelli happened to stop by the store to get a couple of things. “After seeing all the dogs at the store, I just had to go by and show them a little love,” she said. Kelli noticed one dog who looked remarkably like Tinkerbell. The dog was heavier and had a fatty tumor on her hip so she wasn’t sure. Kelli couldn’t resist and called our Tinkerbell’s name just to be sure. The dog responded. “When I called her name, her ears perked up and I started bawling,” Kelli said.

Tinkerbell had been with her foster for about four months, where she was before that is not certain. Gusler is just relieved to have her back. On Monday morning she was back at the auto shop like she hadn’t been gone a single day.