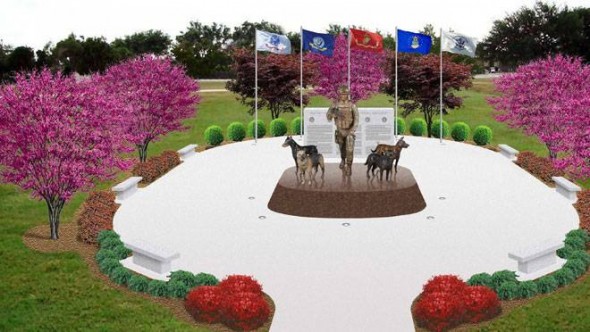 It is perhaps long overdue, but soon a national monument will show much we value the contribution and sacrifice of all military working dogs.  Thanks to the efforts of John Burnam who started the campaign in 2004, on January 1st the monument will be unveiled in California.  It will pay tribute to every dog that has served in combat since WWII and will eventually be placed at Lackland Air Force Base in San Antonio because that’s where most of the nation’s military’s dogs are trained.

Burnam, who is now 65, is a veteran of the Vietnam war with the Army’s 44th Scout Dog Platoon.  He worked with 2 different dogs during that period, Timber and Clipper and is the author of  2 books about his experiences, “Dog Tags of Courage” and “A Soldier’s Best Friend.”.   Referring to Clipper, “He saved my life and saved the lives of others by alerting on ambushes, snipers and booby traps. I wanted to give something back to these animals that have done so much and asked for so little, except for food and water and the love of their handlers,” said Burnam, who received the Legion of Merit, Bronze Star and Purple Heart.

It took years and the support of Rep. Walter B. Jones, R-N.C. before the idea started to become a reality.  Then Burnam pitched the idea on the reality TV show “Who Let the Dogs Out” which led to Natural Balance and Petco (Animal Supplies Inc.) getting involved with a donation of 1 million dollars.  Funding for maintenance will come from sales of a jerky bark treat and from Maddie’s Fund, a family-funded pet rescue foundation.

Tillman, the  athletic bulldog star of “Who Let the Dogs Out” is also being honored for his work.  He has entertained troops at bases and been through a mini Marine boot camp, for which he has been made an honorary private 1st class. 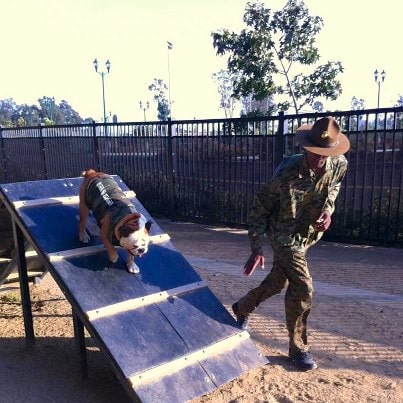 The actual monument was created by sculptor Paula Slater and depicts the modern military handler and four dogs — a Doberman, German shepherd, Labrador retriever and Belgian Malinois, all breeds used in wars.  The  5 figures stand on a pedestal, in front of a large granite wall. On one side of the wall there will be photos etched in black marble veneer showing dog teams in combat from the different wars. The other side will have an inscription written by Burnam.  It will be unveiled in Victory Park, Pasadena after the Rose Bowl parade and then will make it’s way to Texas.