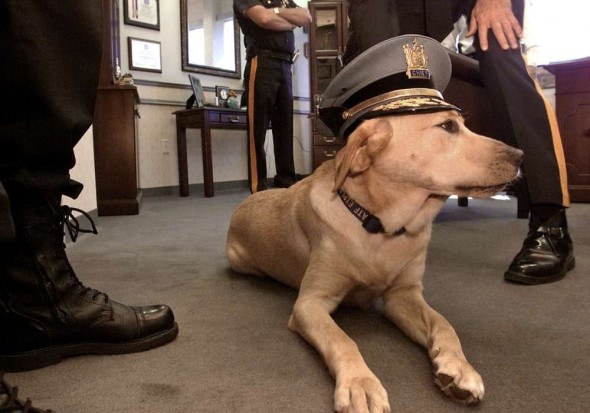 After keeping the residents of North Jersey safe for nearly a decade, a 11-year-old yellow lab named Lorenzo is retiring.

Lorenzo has had a busy life working for the Bureau of Alcohol, Tobacco, Firearms and Explosives and also for the Passaic County Sheriff’s Office. He was on call 24 hours a day with Cpl. Cesar Cerezo. He was always ready to respond to bomb threats, bank robberies, and to sniff out weapons dumped by criminals. Lorenzo also was used at high-profile events, such as the 2004 Republican Nationaal Convetion in New York and the 2005 Major League Baseball All-Star Game in Detroit.

“He’s found a few things,” said Cerezo, who wouldn’t go into detail due to the sensitive nature of their work. “Lorenzo is probably, and I’ve seen a lot of dogs all over the country, one of the best explosive detection canines I’ve ever worked with,” said Chris Bombardiere, a special agent and canine handler at the ATF field office in Newark.

Lorenzo wore a badge around his collar when on duty and when he flew across country he would fly in a seat next to Cerezo. One time a couple was very upset to find Cerezo and Lorenzo in their seats on a flight. The flight attendant had deliberately put them in the bulkhead aisle. The pilot told the couple, “The dog stays on the plane.”

Lorenzo will now settle into calmer life with the Cerezo family. Cerezo is hoping to retire to Florida in the near future and is hoping Lorenzo will be coming with him.