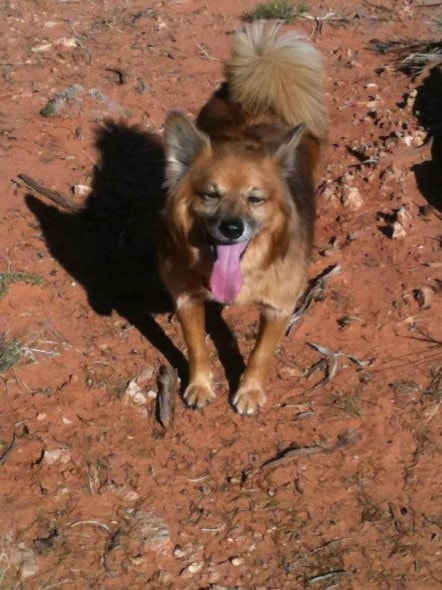 A dog named Rusty spent four years living his life as a wild stray in Oak Brook, Illinois. After avoiding being caught for all that time, one of the many locals who helped feed him was able to finally catch him. Rusty has since found his forever home in Utah, where once again he proved his legend as a survivor when this past August he survived an encounter with a rattlesnake.

Rusty first showed up in the suburban town of Oak Brook back in 2007. Rusty spent nearly four years roaming between the residential neighborhoods and the Oak Brook office campus. Homeowners and office workers would leave out leftovers for Rusty and see him playing with their family dogs in their yards. The community became like a family for Rusty. Finally on September 20, 2010 Rusty walked through a gate into the Trombetta family’s yard to play with their dog Milo. Lynn Trombetta was able to close the gate and call authorities. Rusty went willingly and once taken in to a shelter was found to have a severe heartworm infection.

Neighbors raised more than $1,000 to help Rusty who was taken to the Hinsdale Humane Society. Rusty recovered from his infection, but would require training to lose his feral ways before he could be be adopted. He was sent to Best Friends Animal Society in Kanab, Utah which is famous for rehabilitating animals. A Facebook page was created to share Rusty’s progress with his family back in Illinois.

Four months after Rusty’s arrival at Best Friends Animal Society, Kristine Kowal moved to the area and began volunteering at the animal sanctuary. Kowal was also from the Chicago area like Rusty and had heard about Rusty prior to her arrival, “I wanted to see who this star was, this Houdini who avoided capture for so long,” she said. Not only did Kowal meet Rusty, she would end up adopting him. This October marks Rusty and Kowal’s one year anniversary. After an encounter with a rattlesnake back in August, Kowal wasn’t sure they’d make it to this anniversary. Rusty’s ability to survive pulled him through once again.

Kowal took Rusty and her other dog Maddy hiking one day in August. “Rusty went up to a sagebrush and gave a bark. Then I heard a chilling yelp and then I heard the bone-chilling rattle,” she said. Rusty had been bitten twice on his front right leg by a poisonous rattlesnake. Kowal carried him for 20 minutes to her friend’s car. “When I was walking, I thought he was going to die,” she said. It took a few weeks but Rusty would make a full recovery. During the ordeal, Rusty’s former family in Illinois supported Kowal and Rusty. “The people back there and his friends on Facebook really helped me pull through,” said Kowal.

The rattlesnake ordeal helped Rusty leave his wild ways behind as well. Kowal had worried that Rusty might regress during the ordeal, but the opposite happened, “He is now the most lovey-dovey, touch-me touch-me, Velcro dog I could ever have,” she says. Rusty has settled into his new family and life in Utah but will never be forgotten by his friends in Illinois. They are already planning a holiday care package to send to Rusty. The package will include toys, handmade treats and gift cards to buy whatever Kowal and Rusty need.

4 thoughts on “Rusty the survivor dog”