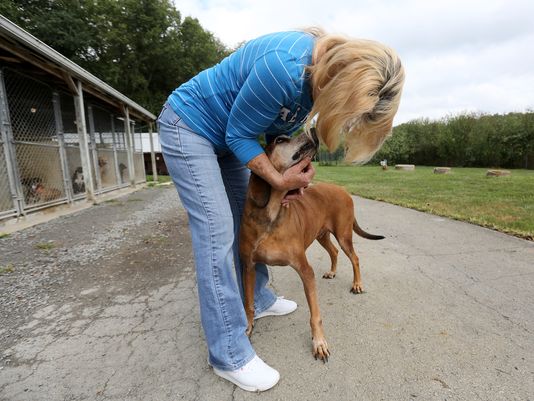 For almost nine years Dan has lived at the Highland County Humane Society in Ohio. He has been placed in forever homes four times, but it has never worked out. After all these years the shelter refuses to give up on Dan and finding him the home he deserves.

Dan, a redbone coonhound, first came to the Highland County Humane Society in September 2004. He had been picked up by Highland County Animal Control. The dog warden Jeff Vickers knew Danny would not last long in the pound and wanted to make sure he found a place in a no-kill shelter. He called Dodson at the Humane Society Shelter, a small shelter with only 16 kennels. At the time she had no room, but Vickers didn’t give up. He called day after day until finally a kennel opened up and Dan now had a chance.

Dan is now around 13 or 14 years old, but he is in good health. He has spent most of his life in his kennel. It isn’t much, but for Dan it is home.

“Danny is always happy to be home,” said shelter director Melanie Dodson. “I do believe he thinks this is home.”

Dodson and the rest of the staff at the shelter try to give Danny comforts and a happy life. He gets outside a few times a day to run around, he is properly fed and gets treats and  Dodson often takes him for rides in his Jeep, a favorite activity of his.

Danny has been hard to place because he doesn’t get along with children or other dogs. Four times Dodson has thought she had found him a home, but each time he came back. The first family that adopted Danny had little kids, and a few days later he was back at the shelter.

“Now I don’t know exactly what happened, maybe the kids rushed him, maybe Danny told them to back off,” Dodson said. “A few days later they brought him back.”

A year later an older woman with no children and dogs tried to give Dan a forever home. It seemed like a good fit. Unfortunately, at some point Dan bit the woman’s toe and it frightened the woman, so Dan was back at the shelter again.

A few years later, a couple came to adopt Dan; it seemed like another good fit. Dodson went to check on Dan a few days later and found him home alone and chained up in the backyard to a box. Dodson took Dan back to the shelter.

Dan got a fourth shot at a home when a judge who knew about him tried to see if he would fit at his home. The judge had one small, older dog and thought it might work out. Unfortunately didn’t and Dan was back at his kennel in the shelter. He hasn’t left since.

As Dan’s story has gotten out the shelter has received complaints from people who think it is cruel for a dog to live in a shelter that long.

“We’ve got people who think we are the most horrible people in the world, keeping a dog that long,” Dodson said. “One lady said to just put him down. I told her: ‘You come up and put the needle in him.’ Dogs are not disposable items.”

Dodson is still hoping that she’ll be able to find the right home for Dan. She believes Dan is happy but thinks he deserves a real home.