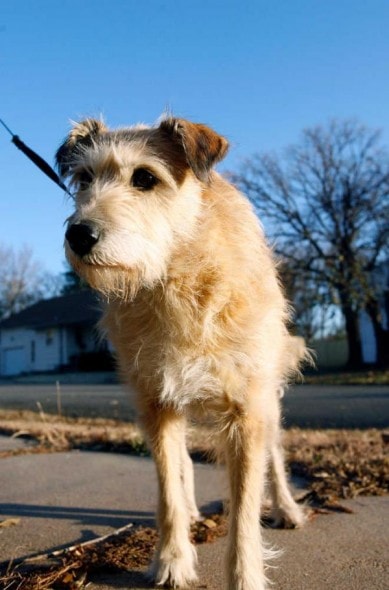 It was over eight years ago that residents in Buhler, Kansas spotted a stray dog that wouldn’t let anyone get near her. The community took care of her with food and water for all that time until finally Rachelle Cavanaugh was able to gain the dog’s trust and take her home.

No one is really sure where the dog, who they referred to as D.D. for Ditch Dog, came from. People tried to get close but she never let anyone near her. Residents of Buhler started leaving food and water out for the dog. Even when D.D. got her paw caught in her collar, she wouldn’t let anyone come close to her to help. Instead she got around on three legs until the collar rotted away. For eight years people left food and water out for the dog, one woman even left a large self-feeder for D.D. “Everyone adopted her,” said Buhler Police Chief Bill Tracy. “She was the best-fed dog in town. She never bothered a thing and that’s why she was allowed to stay out there.”

Cavanaugh took a special interest in D.D. a little over a year ago. She noticed the D.D. appeared to be arthritic, so she started to leave treats with medicine in them to help with the pain. She also put flea medicine in some food for D.D. as well. One night as Cavanaugh sat by the food dish D.D. came close enough to let Cavanaugh touch her. Cavanaugh with cautious with D.D., slowly letting D.D. get used to being around her. One day she got D.D. to jump in her car and go for a ride. She introduced D.D. to her own dogs and arranged for a vet to come to the field and give D.D. shots. Finally about a month ago, D.D. was ready to move in with Cavanaugh.

D.D. still is adjusting to her new life. She gets very anxious at night, after years of spending nights in a culvert fending off coyotes. “She goes to her pillow,” says Cavanaugh. “She knows she’s safe there.” After eight years in the field D.D. has a home and a family. Cavanaugh put up a sign in the field to let all of those who cared for D.D. know she is safe. It reads, “Buhler: Thank you for all the years of care and concern. I have found a home and I am adjusting. God bless you, Ditch Dog.”