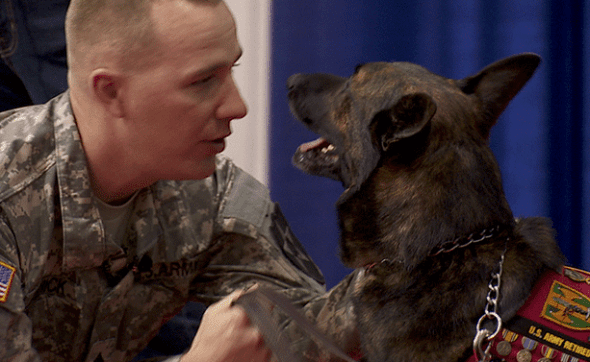 Sergeant Stephen Strick didn’t think he’d ever see a Dutch shepherd named Luke ever again. The two had been deployed together in Iraq and it had been three years since the two had seen each other. This Saturday the two were finally reunited.

For more than a year Luke and Sgt. Strick were side by side deployed in Iraq. In 2010, Luke was reassigned and the pair went their separate ways. In 2011, Luke retired and was adopted by Debbie Kandoll of Texas. Kandoll runs an adoption service for military dogs and has always wondered about Luke’s past and his handler. “I’ve been trying to find out his history,” said Kandoll. “I knew he was combat tracking. I got a little bit here and there. I was piecing together the parts. But I always wanted to find the one handler.”

To try to find out more Kandoll posted a photo of Luke on Facebook, hoping someone might know something. By chance one of Strick’s friends saw the photo and notified Strick who commented on Kandoll’s photo. “Under the comments section was: ‘I deployed for a year with that dog. He was my combat tracker.”

Luke was traveling to the Pet Fair at the Portland Expo Center in Portland, Oregon this weekend for an exhibit on military working dogs. So Sgt. Strick arranged to drive three hours from his base near Seattle to be reunited with his old partner. “It’s like seeing a family member again you haven’t seen in forever,” said Strick. “It’s almost like we’re brothers.”