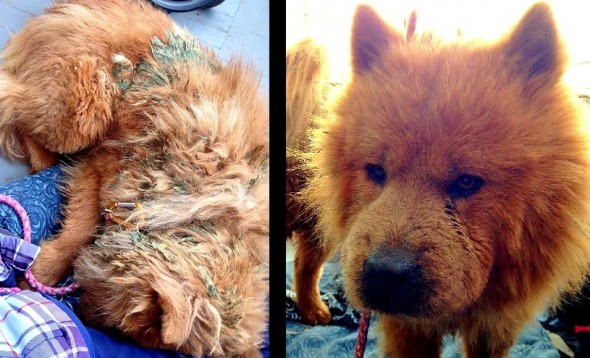 This comes from Hearts United for Animals out of Nebraska:

Rescue in Progress – John and Julie are just arriving back at HUA with The Lion King. He has been homeless in a disadvantaged part of north Omaha (just north of 20th and Lake) for an estimate of three years. An HUA Director was alerted to the situation on December 10th. Local animal control had reportedly been trying to catch him for three years. The dog, sweet but very afraid, only had the courage to approach children. Unfortunately, this summer those children thought it would be funny to dump green paint on him. He forgave them. He often walked with them to school, keeping them company at the bus stop, but no adult could get close enough to touch him. Reports were that his collar was grown into his neck. It may have been at one time, but today, when he was finally captured, it hung very loose. Although kind neighbors had been setting food out for him, he was burning calories from trying to keep warm faster than he could eat.

The Lion King Makes Friends – John and Mac at HUA are spending time getting to know The Lion King, a stray who had been…

Posted by Hearts United for Animals on Thursday, December 31, 2015

He had been frequenting an abandoned house where HUA set a humane live trap when we heard of his plight. We canvased the neighborhood talking to neighbors and offering rewards. Today was The Lion King’s lucky day. He wandered into an enclosed porch of a home where he frequently visited the husky in their yard. They had left the door open for him so he would come in and get a drink as all of the water set outside for him is now frozen solid. They were able to go around the side of the house when they saw him and quickly close the door. He fell into a heap when he was first touched, very relieved and very grateful. John spent some time getting to know him on the porch and was then able to carry him to the van for the ride back to HUA. 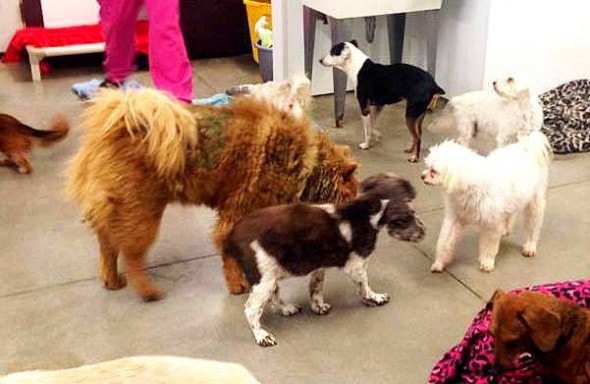 It is too soon to know what his needs are, but obviously they will be extensive. It will take several days of earning his trust to be able to groom him and find out all of his medical needs. He did not appear to have any severe wounds. His paw pads are ok but nails are down to the nub from wearing on the pavement. He will be treated for fleas and other parasites tonight. Right now his main need is to eat and rest. We will have to take things slow with this precious boy, as his spirit has been very broken in the past. We aren’t sure if he has ever had a home, but today he does. He is home at HUA. 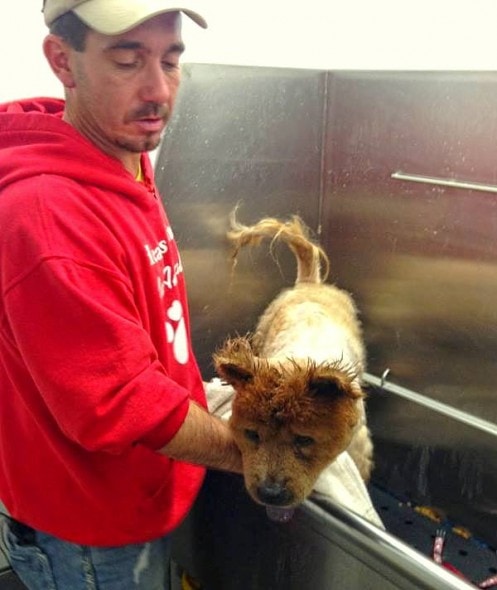 The Lion King has a little bubbly (bath) for New Year’s Eve.  Earlier today, after consulting with his new-found little dog friends in Homeward Bound, The King decided that a bath would be ok. He even graciously consented to having his fur shaved. Julie said it was the hardest groom she has ever done, as the paint and years’ worth of dirt were glued to his skin. As we suspected, he had to be completely shaved. John stayed by his side and gave him frequent breaks with short walks and words of encouragement. Our gentle giant is all clean and ready to start the best year of his life. After three years stray on the streets of North Omaha, this was likely his first bath ever. We are so proud of how well he did. 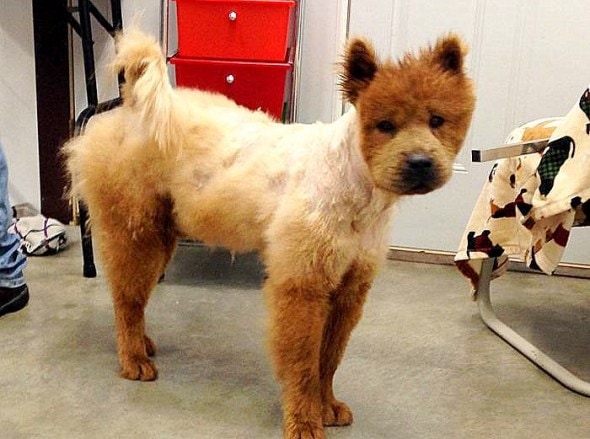