After years of living at a landfill Mr. Hobo hopes to have a real home 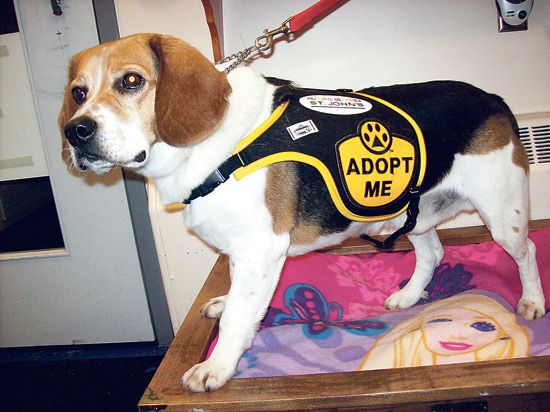 Mr. Hobo was originally rescued from another landfill and taken to the SPCA where he was adopted by a family. Unfortunately, only a few days after being adopted he escaped from his new home. Mr. Hobo found his way to the St. John’s landfill where he has spent his days for almost three years. “We started getting calls (about the dog) in February of 2010,” said St. John’s Humane Services supervisor Cindy McGrath.

Mr. Hobo wouldn’t let anyone get close to him and lived off food he found in the landfill and scraps workers would leave for him. Humane Services employees made several attempts to capture Mr. Hobo. They tried netting him and baiting a trap with roast chicken, but neither method worked. Volunteers from the animal rescue group Beagle Paws also tried to help capture Mr. Hobo but were equally unsuccessful.

After their unsuccessful attempts the Humane Services looked into a medicated dart gun, but after contacting officials with the department of wildlife it was concluded that with Mr. Hobo’s small size a dart gun could cause more harm than good. The Humane Services then decided to work with the city’s veterinarian Dr. Heather Hillier to try to sedate Mr. Hobo.

Hillier and her assistant Rose Gillingham went to the landfill with a trap and roast chicken that was laced with sedative to hopefully at least slow Mr. Hobo down. After monitoring the dog for an hour and running out of chicken, Mr. Hobo appeared sleepy but still not sedated enough to let someone near him. So Hillier and Gillingham tried setting up a trap. They lined it with a blanket and tied the door so it wouldn’t shut if the dog went in. They wanted Mr. Hobo to get comfortable with it. Leaving a trail of chicken that lead right to the trap, Hillier and Gillingham checked it often and refilled the chicken. Once they had signs that Mr. Hobo was going into the trap they reset the door so that it would close if he went in.

On November 14th, animal control officer Mike Joyce set the trap and put out food. When he returned a few hours later Mr. Hobo had finally been caught. Joyce and his co-workers were thrilled to have finally caught the elusive beagle. “We were trying for so long and it was a pleasure to get him this time of year, especially with the cold weather coming on,” Joyce said.

Now that Mr. Hobo was captured, the Humane Services were concerned whether he’d be adoptable. An examination by Hillier found him to be timid but healthy and even overweight. “He’s a big boy, beagle wise, and other than smelling like a landfill, he was in good health. We’ve since got some vaccines into him and a really good de-worming protocol,” said Hillier.

Mr. Hobo has been getting used to humans in his short time at Humane Services. He will spend another week or so in their care. If no suitable home is found for him by that time he will go to Beagle Paws rescue. McGrath is hopeful that a home will be found for him soon, “Instead of sleeping in the landfill, he’ll be sleeping on the foot of someone’s bed. He deserves that.”