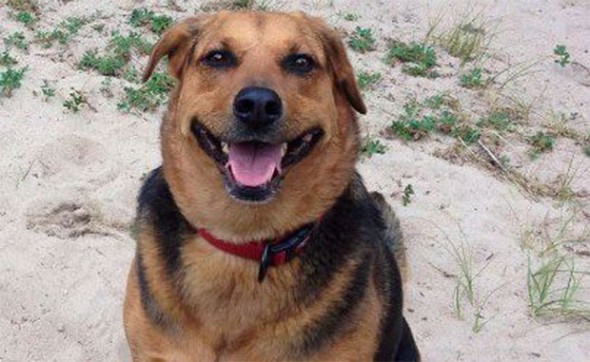 Rob Shura is devastated over the loss of his dog Pippin.  When Pippin got caught in an illegal hunting trap, Shura had to watch as she died in his arms. He is now determined to have trapping banned in provincial parks.

Shura walks his two dogs, Pippin and Mary, through the trails at Grand Beach Provincial Park in Manitoba, Canada three or four times a week. On November 22nd, while out on their usual walk, tragedy struck. Shura was walking when he heard Pippin let out a yelp about 30 feet from the hiking trail. Shura rushed to find Pippin’s head caught in a Conibear 220, a metal trap used to kill animals like raccoons, badgers, foxes and beavers. “It was horrifying. I immediately rushed to her and I tried to pry it off with my hands. I couldn’t budge it. I tried to press the springs with my hands and I couldn’t,” said Shura.

Instead Shura had to watch as Pippin died in his arms. He sat and wept in the snow next to her for a long time. “It was just complete hysterical shock,” he said. “To be quite honest I remained that way for quite some time…I was just weeping over her body. I can still remember her looking at me.” He then untied the trap from the tree it was attached to and carried her out of the woods.

When Shura reported the incident he was shocked to find out from a conservation officer with Manitoba Conservation that trapping was permitted in many provincial parks. “I really think that the ministry is negligent and incompetent in this situation.” Shura said. “They have not protected the public. They haven’t notified the public of potential danger.” He further learned that the trap that took Pippin’s life was set illegally.

Shura now wants to protect other animals and the public from the horror that he and Pippin endured. He wants trapping better regulated and banned from Grand Beach Provincial Park. He has started a Facebook page about Pippin and is urging people to contact their MLA and Premier Greg Selinger to push for a ban on trapping in provincial parks.