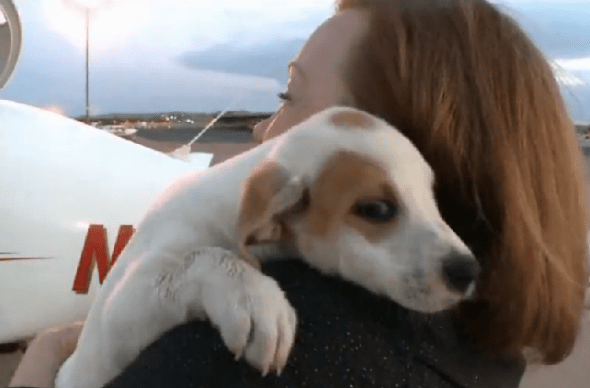 Six puppies and their mother were all in danger of being euthanized when a cadet at the U.S. Air Force Academy came to their rescue.

The puppies and their mother were in a shelter in Plano, Texas and needed to be rescued before Sunday or they would be euthanized. A rescue group in Boulder, Colorado had arranged for homes for all of the dogs, but needed help figuring out how to get them from Texas to Colorado. When Cadet Second Class Adam McMurray heard about the situation he didn’t hesitate to help.

“I’m a member of the Aspen Flying Club,” said McMurray. “An email was sent out by the club’s owner to all the different pilots requesting for a volunteer to take charge on it, and I raised my hand on it.”

McMurray, accompanied by his dad, spent his Sunday flying over 1,200 miles to bring all seven dogs to safety. McMurray paid for the flight himself, costing him around $1,000. He was met at the airport in Colorado by the Colorado Aussie Rescue who took the puppies and their mother to their new homes. McMurray was just happy to help the animals in need.

“I’ve always had an urge, or a calling to help as much as I can,” said McMurray. “This is kind of like an ode to my former dog. I had my dog from kindergarten to my senior year in high school, and haven’t had a dog since. I saw it and I just felt I really needed to take the charge on it,” said McMurray.

McMurray says the mother and her puppies were excellent passengers, and hardly made a sound the whole plane ride.

“It’s just really good to know that my dad and I were able to get out there and help make a difference for these fellas,” said McMurray.