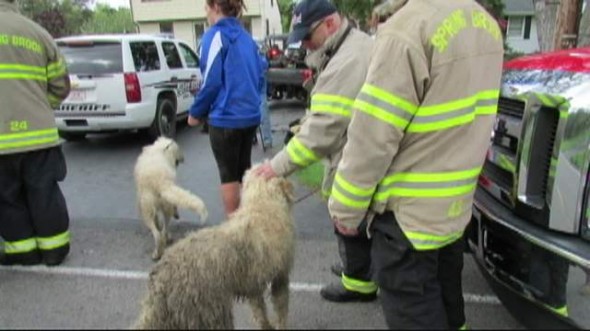 It was a happy Mother’s Day for Julie Schwab when she was reunited with her missing dog, Tinkerbell. It took a daring rescue from firefighters to bring Tinkerbell safely home.

Tinkerbell and Schwab’s other poodle mix Mator went missing last Thursday afternoon. Mator made his way home Thursday night, but there was no sign of Tinkerbell.

Sunday morning a turkey hunter saw a dog near the top of a 75 foot cliff by a waterfall in Elma, New York. The turkey hunter called for help and soon the Elma Dog Control officer, Spring Brook Volunteer Fire Department and Erie County Sheriff’s Office were all on the scene to help rescue Tinkerbell.

First the rescuers had to walk up 200 yards to get to a point where they reach Tinkerbell and then the daring rescue began.

“At that point we hoisted volunteer fireman D.J. Thompson about 10 to 15 feet up a rock face, where he was able to grab onto some trees and get his hands on the dog,” said a fire official.

Another key member of the rescue was Mator. He helped draw Tinkerbell toward the rescuers, who were then able to bring her down to safety. Although a risky rescue, everyone involved was happy to be able to help reunite Tinkerbell with her family.

“The animal is helpless,” said a fire official. “It can’t do anything for itself, and everyone involved was extremely happy to stick their neck out and help the animal and help the dog owner.”