The Sept. 11, 2001, terrorist attacks on the World Trade Center and the Pentagon have left lasting impacts on the American population. While many human rescuers are showing respiratory health problems a decade later, their canine colleagues have had minimal setbacks, according to the University of Pennsylvania School of Veterinary Medicine 9/11 Medical Surveillance study.

With nearly $500,000 of financial support from the AKC Canine Health Foundation (CHF), the study monitored the long-term health impacts on 95 search-and-rescue dogs deployed to the World Trade Center, Pentagon and Staten Island landfills. Researchers also compared their health to a control group of non-deployed search-and-rescue dogs.

“The most striking thing is that many of the humans that responded have developed reactive airway diseases, such as asthma, sinusitis or other chronic infections in their nasal sinuses. The dogs on the other hand have fared extremely well,” explained Dr. Cynthia Otto, DVM, Ph.D., University of Pennsylvania School of Veterinary Medicine associate professor of critical care and principal investigator of the research. “They’re not developing any problems with their lungs or sinuses. That is a real surprise.”

Dr. Otto pointed out that the vast majority of canines suffered minor cuts and scrapes despite not wearing protective gear. Kaiser, now a 12-year-old German shepherd, was one of only four dogs in the study that required stitches while working at Ground Zero.

“On our second day there, Kaiser sliced a pad on the pile,” said Tony Zintsmaster, Kaiser’s trainer and a charter member of Indiana Task Force One. “Once he was stitched up and felt better, Kaiser went back to work. He was quite amazing. He was able to adapt to the situation and showed great agility. He seemed happiest when he was on the pile working.” 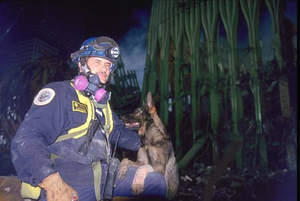 Zintsmaster, along with other handlers who participated in the study, submitted annual X-rays, blood samples and surveys on their dog’s health and behavior to researchers.

Tom Andert and his 12-year-old chocolate Labrador Tuff are former members of Missouri Task Force One and also participated in the study. “Not only was my veterinarian performing the X-rays, taking the blood work and reading the results, but Dr. Otto was looking at them as well. It was a piece of mind to know that Tuff was healthy,” Andert said. “It was a comfort every time they came back and said, ‘You have a healthy dog.'”

“These dogs are a national resource and it’s remarkable to know how well they were able to endure such harsh conditions,” said Terry Warren, CHF chief executive officer and general counsel. “It has been an honor to work with Dr. Otto to fund this groundbreaking research. Our goal is to help dogs live longer, healthier lives and this research is one example of that.”

Because canine and human genomes are similar and most canine diseases also occur in humans, future research could center on learning why the search-and-rescue dogs were able to endure the challenging conditions with minimal respiratory complications. Identifying respiratory genetic markers in canines could lead to the development of treatments of respiratory ailments in humans.

“The findings may open our eyes to the difference between dogs and people that makes them so resilient,” Dr. Otto said. “If we could tap into that, we might actually help move human health forward.”

CHF is a non-profit organization dedicated to funding research to prevent, treat and cure canine disease. Visit CHF online at www.akcchf.org for more information about the Foundation.