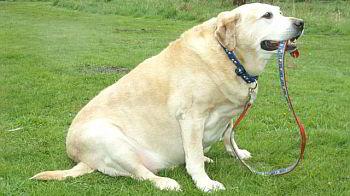 Alfie the loveable Labrador was signed over to the RSPCA after his elderly owner kept forgetting he had already fed his pet.

The 12-year-old pooch tipped the scales at an eye-watering 80 kilos / 176 pounds when he arrived at the RSPCA’s Leybourne Animal Centre on March 5, 2012 and he was so fat it took four people using towels as slings to lift him.

Christine Dooley, centre manager, said: “He literally could not stand up when he arrived because he was so fat. I have never seen a dog that fat before in my 27 years with the RSPCA, he must be Britain’s fattest pet.

“He was just a massive blob with a leg at each corner.

“He was being fed to death, it’s amazing he was alive given his size. A healthy Labrador weighs about 30 kilos (4stone 7lbs) so poor Alfie was carrying the weight of two Labradors and a Staffie too.”

The lardy Labrador struggled to walk more than few steps and could not even lift his legs a couple of inches into a raised bed in his kennel so staff at the centre made him comfortable with a piece of carpet and blankets on the floor.

The heavyweight hound’s neck is so big Alfie wears the same size collar as a St Bernard dog.

He has been put on a carefully calorie controlled diet with two meals a day, weekly weigh-ins and strictly no treats.

His extreme obesity caused him to pant as he struggled to breathe, may have damaged his joints and led to pressure sores on his legs. But since arriving at the centre in March this year (2012) he has already lost 30 kilos (about four and a half stone) – more than half way to his target weight.

Christine added: “When he first came in he couldn’t go on walks because of his size but each day as the weight is coming off he is able to take a few steps further. We have to be careful when staff take him for a walk because if he sits down and refuses to get back up we have to call in extra people to lift him up again.

“We want the weight to come off slowly to give his leg muscles a chance to build up strength and for his skin to shrink. We cannot foster him out yet because he wouldn’t be able to get him into the back of a car.

“He’s such a lovely dog and his tail never stops wagging everyone here has fallen in love with him.”

Once Alfie has reached a manageable weight staff at the centre near Maidstone, Kent, will start looking for a home for him where his owner will need to keep up his healthy diet and gentle exercise regime. As of September, 2012, Alfie weighs 50 kilos / 110 pounds. He still needs to lose another 20 kilos / 44 pounds.

Sadly although Alfie’s obesity is extreme it appears to be a growing problem among dogs. Since 2009 the number of complaints and calls the RSPCA has received about fat, obese and overweight dogs has steadily increased from about 20 a month to more than 30.

RSPCA Inspector Caroline Doe who is based in Kent said over indulging a pet is just as harmful as not feeding them enough.

She added: “Alfie’s case is exceptional, I’ve never seen a dog that big before, but there are lots of dogs out there which are overweight or obese.

“People don’t seem to realise it’s a problem because they think they are showing their pets love by giving them treats and titbits.

“In fact in terms of causing suffering, allowing your dog to become extremely obese is just as damaging as starving it and letting it get very skinny.”

Studies from various parts of the world estimate that up to about 40 per cent of dogs are overweight or obese. Allowing your pet to become obese can cause severe health problems, which could cut short their life, including:

To check if your dog is a healthy weight you should be able to see and feel the outline of their ribs without excess fat covering them, they should have a waist which is clearly visible from above and their tummy should be tucked-up from the side.
If you think your dog is overweight contact your vet for a health check and if necessary, feeding and exercise advice.