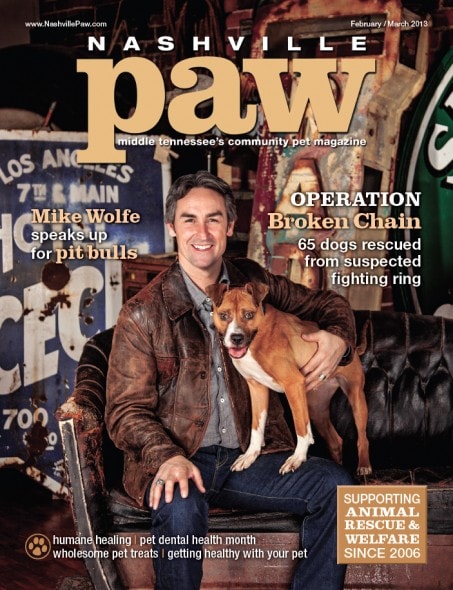 The History Channel’s Mike Wolfe has a good eye for spotting valuables.  Some items might not look like much, but once they’ve been refurbished, their full glory shines through like a beacon.  That’s why he aims to restore a true American treasure – pit bulls.

Wolfe has a soft spot for animals, and is using his celebrity for a good cause.  He is teaming up with Nashville Paw magazine to help shine a positive light on the much abused, exploited, misunderstood and maligned breed.  He made the magazine cover, which features the story we brought to you in November of the 65 dogs rescued from a fighting ring in Tennessee.  He is pictured with Shay, one of the dogs rescued.

The magazine will hit shelves in the Nashville area in early February.  Wolfe partnered with the Nashville Paw Foundation, which promotes animal welfare and funds local pet spaying and neutering, for a PSA that also debuts in February.  Starring alongside him are Shay and Samantha, another rescued pit bull.  He hopes the PSA will help people see there is more to pit bulls than what is shown on the news.

“For years, pit bulls have been the victims of not only abusers who force them to fight, but of an incredibly misinformed public perception,” said Nashville Paw founder and publisher Heather Dowdy.

Dowdy has been a long-time pit bull advocate, and last year adopted one on death row.  She wants people to take a look beyond the horror stories and stereotypes. 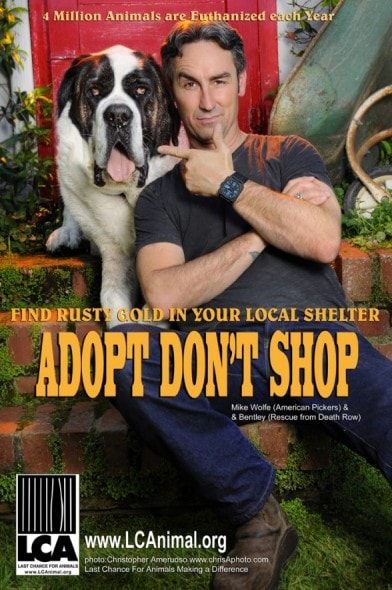 “In the days of The Little Rascals television show, pit bulls like Petey were considered the ideal family pet because they are so loving, loyal and great with kids.  These dogs have not changed since then.  The media has simply given them a public lashing for so long that many people now believe they are somehow dangerous.  That could not be further from the truth, but that myth has resulted in an estimated 75% of pit bulls being euthanized upon intake at shelters across the country rather than offering them the chance of adoption.  It’s astounding how much damage can be created through hype and misinformation.”

That is not to say that every pit bull is an angel, and every story about a child being mauled is a falsehood.  Sadly, many pit bulls and other bully breeds have attacked and killed, and will again.  But they are not born to fight and kill people and other dogs – they are made that way through isolation, neglect and abuse.  Pit bulls have excellent temperaments, and surpass golden retrievers and beagles in tests performed by the American Temperament Test Society.  Raised in loving homes and trained well, pit bulls have all the capacity in the world to be friendly, gentle, loyal and sweet dogs.  Many people are unaware of this fact, but among pit bulls’ top hobbies are snuggling and giving kisses.

Wolfe got to see this firsthand while filming the PSA with Shay and Samantha, who showered him in kisses.

“For anyone who believes that these dogs can be made vicious, I ask them to consider this,” said Dowdy.  “Here are two dogs rescued from a fighting ring just weeks ago, and they are rolling around like babies in a stranger’s lap.  These dogs were horribly abused.  Yet, not a single dog in the whole group of 65 has shown any aggression to anyone whatsoever.  They simply are yearning to love and to be loved.  That is what we want the public to understand through this awareness campaign:  that pit bulls are amazing, loving, intelligent and playful dogs who, despite suffering so much abuse, continue to love and forgive.”

Wolfe’s PSA will first be presented at Art for Animals, the magazine’s annual spay and neuter fundraiser, at the Franklin Factory.  Then it will be uploaded to YouTube.

“It’s hard for me to believe what some of these animals have to endure, but what I think is so amazing is that despite what they go through, despite what people are capable of doing to them, they are so forgiving and so trusting of us,” Wolfe said in his interview with the magazine.  “That is what I try to learn from my own dogs all the time.  I mean, imagine walking through life with that sort of capacity for love, trust and forgiveness.  That would be a perfect world.”