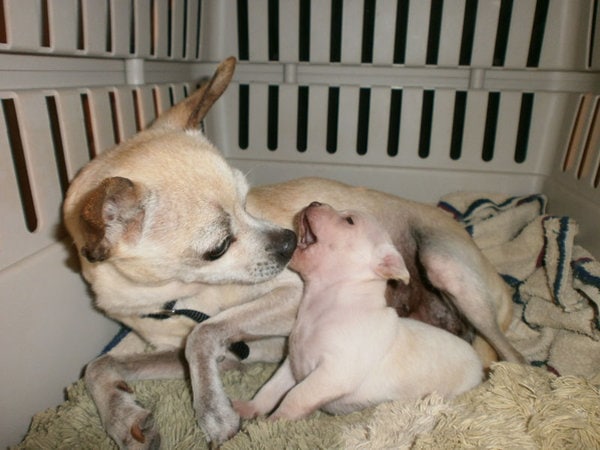 Sometimes, out of tragedy comes a ray of sunshine, or even two.  Several weeks ago an 8-10 year old Chihuahua called Little Miss was picked  up at the side of the road in Ocean Shores, Washington.  Her rescuer took her to North Beach PAWS animal shelter.

Little Miss was starving, and it was discovered that not only did she have a severe heart murmur, she was pregnant.  Due to her poor health and the condition in which she was found, no one expected this to end well.  Little Miss was sent to Old Dog Haven where her foster mom, Linda, who works at the Ocean Shores Animal Hospital took her in.  A little over a week later Little Miss gave birth during the night to a healthy little pup.  She had kicked Orly, her foster brother (also an Old Haven pup) out of his bed and given birth there.

By the time Linda got there the pup was cleaned up, eating breakfast, and cuddling with mom. Little Miss is a wonderful mother and her pup is doing very well in her care.  A contest was held to decide upon a name and raise money to help care for the new addition, and the winning name was Gigi.  Over $600 was donated by an anonymous donor which will go a long way to getting Gigi off to a good start until she is eventually adopted.  “She is a generally fat, happy, contented baby” says Linda. 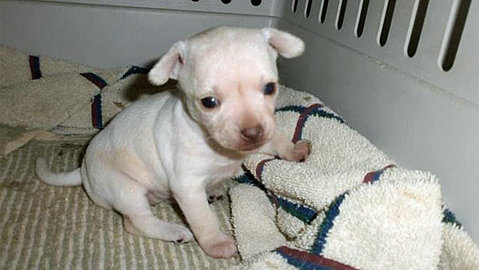 Little Miss is deemed a “final refuge dog” due to her serious health conditions.  This means that she will likely stay with Linda for life, unless some kindhearted soul decides to take her in.  None of this could have happened were it not for the selfless person who picked up Little Miss at the side of the road, and ensured that she could live out her days in a loving home.