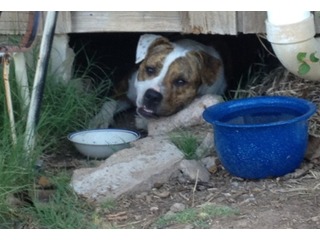 Through a desperate search to find her own missing dog, a woman in Lubbuck Texas was able to reunite a California family with their lost dog.  Tina Anderson’s dog went missing in November 2011.  The following spring, still trying to find Gracie, she found a posting on Craigslist that struck a chord with her.  A family in California was appealing to anyone living near Lubbock to keep an eye out for Nahla who went missing near there in March 2012.

Nahla had been traveling through West Texas with her family when their vehicle was involved in an accident.  Spooked, Nahla ran off and had been missing ever since.  Her family searched for 3 days but then had to return to California without her, but they never gave up hope.  Anderson called the woman from the ad, who is named Nancy, and subsequently set out to help her find her missing pet.

On her second outing to the area where Nahla went missing 3 months earlier, and she found her.  “We look to the right and there was a heeler on the right side of the road and it was like the dog was pointing to the left and there was Nahla,” Anderson told us. “We took a picture, sent it to her (Nancy) and she’s screaming like that’s her, that’s her!”

Nancy and her daughter flew out the next day to be reunited with Nahla. Soon after, they discovered she was pregnant and Tina Anderson who still has not found Gracie, was happy to adopt one of Nahla’s puppies.  “Something good came from something unfortunate that happened,” she said.