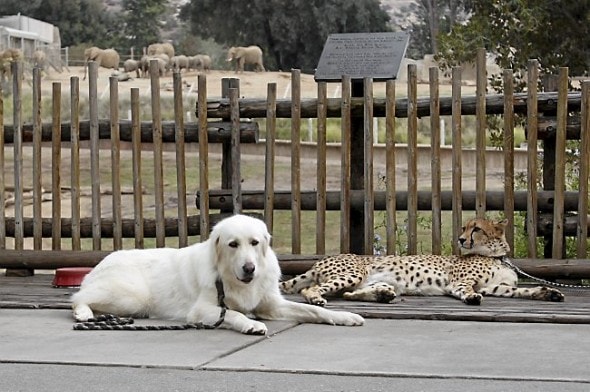 It’s hard to fathom, a dog and a cheetah living together in a zoo?  But it’s true, and it works.  “It’s a love story of one species helping another species survive,” said Jack Grisham, vice president of animal collections at the St. Louis Zoo.  Of the 19 cheetahs at the zoo, 4 have canine companions who play with them, watch out for them, and teach them to be more social.

“It is all about comforting and reassuring the cheetah,” said Janet Rose-Hinostroza, animal training supervisor at the San Diego Zoo Safari Park, where there are also 4 cheetahs with dogs.  Cheetahs are not social animals, which makes it difficult for them to mate, and may be their biggest threat in fighting extinction.  They are by nature skittish, so having dogs with them, who are by nature social seems to be a comfort.

“In this relationship, the dog is dominant, but we look for dogs that want to be a buddy,” Rose-Hinostroza said. “The dog always has the cat’s back, but it’s never the other way around. Dogs worry about their cats. They protect their cats.”  For that reason they are not always together, for example during mealtimes they are separated so the dogs eat kibble and the cats eat steak.  “The dogs are the bosses in these relationships,” Rose-Hinostroza said. “If they ate together there would be one really fat dog and a really skinny cheetah.”

The cheetahs are doing their part to help the dogs too, since most of the companion dogs are rescued from shelters for their new job.  They are paired up when the cheetahs are cubs, around 3 months old.  This is idea is not a new one, in Africa dogs have been used for decades to protect sheep from cheetahs.  This in turn, keeps the cheetahs from being killed by farmers.  “For the first time in 30 years, the cheetah population in the wild is on the rise because ranchers don’t have to shoot them anymore. They don’t need to shoot them. The dog is that effective at keeping the cheetah away from the herd,” Rose-Hinostroza said.

And on top of everything else, it is quite a sight to see a cheetah and a dog sharing a space, keeping each other company, and growing up together.