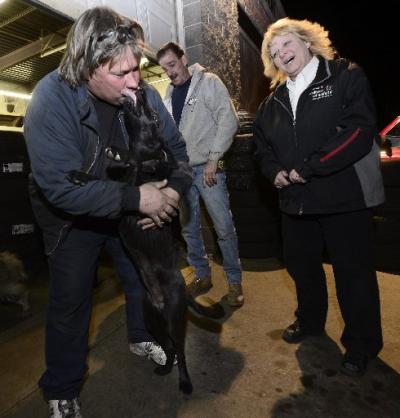 It was a long three days for Steve Knutson after his puppy Cheyenne was stolen with his pick-up truck last Thursday night. It ended happily when Knutson and Cheyenne were reunited late Sunday afternoon.

Cheyenne, a five-month-old black lab, was sitting on the front seat of Knutson’s pick-up truck outside Knutson’s business, Diagonal Tire and Alignment in Longmont, Colorado Thursday night. Knutson was working on another car when around 6:10 p.m. his truck was stolen with Cheyenne inside. Surveillance video showed a man wearing a stocking cap, a scarf, a dark jacket and dark pants get into the truck and drive away. The video also showed Cheyenne tried to get out but he man pushed her back inside the truck.

Knutson and Marcie Cullen put up missing posters and checked with all nearby service stations since the truck only had two gallons of gas in it when it was stolen. There was a break in the case on Saturday morning when Fort Collins police found Knutson’s pick-up truck and arrested the suspected thief. However, Cheyenne wasn’t in the truck when it was found.

Then on Sunday authorities found Cheyenne thanks to a Good Samaritan. A resident in Westminster was getting gas in Denver when a man approached him and gave him Cheyenne telling them they couldn’t take care of her. That man took Cheyenne home and called Westminster Animal Management. While authorities investigated who owned Cheyenne the man took good care of her. With the help of a microchip Cheyenne and Knutson were reunited on Sunday.

Mark Cittadino has been arrested in Fort Collins and is being held on suspicion of aggravated motor vehicle theft and criminal mischief. Longmont detectives are continuing their own investigation. Anyone with information about the theft of the dog and the truck are asked to call Longmont police at 303-651-8501.

Knutson is glad to have his truck back, but more importantly Cheyenne. He is thankful to all the good people who helped Cheyenne make her way back home. He has even made friends with the Good Samaritan who took good care of her until her home could be found. “If I want to go on vacation, this guy will take care of her,” Knutson said.