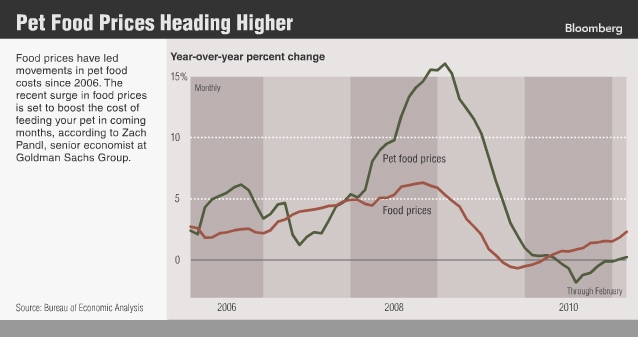 The second half of 2011 is expected to bring dramatic increases in the costs of pet food, according to analysts from Goldman Sachs.

A new chart from Bloomberg shows how changes in the food component of the consumer price index have influenced changes in pet food prices since 2006. Predicted spikes in the cost of food are expected to be followed closely by pricing increases in the pet food industry.

When one considers that Americans spent more than $45 billion on pets and pet-related products last year, it’s easy to see how sharp increases in pet feeding costs are expected to negatively impact discretionary spending, and hurt other sectors of our consumer based economy. As a matter of fact, Americans now spend more on dogs than we do on our cars, according to data from the Commerce Department’s Bureau of Economic Analysis.

“Recent food price increases appear to be passing through to pet food products, as they did to an even greater degree in 2008, Zach Pandl, senior economist at Goldman Sachs Group Inc., said in a research note to clients. “These gains have added to the rise in core inflation, and likely will continue to do so for a while longer.”