In a recent paper submitted to the Journal of Archaeological Science, paleontologists at Predmostí announced the discovery of the remains of three dogs from the Paleolithic era.

For you non-archaeologists, Predmostí is a fossil site located in the Moravian region of what is today known as theCzech Republic. It is thought to be 24,000 to 27,000 years old.

Archaeologists believe Predmostí was a living area with a burial ground. Human and non-human remains have been unearthed. These include mammoth (over 1,000 of them), bear, reindeer, ice-age horse, wolf, wolverine and hare.

Predmostí consists of dwellings, hearths and a cemetery. In addition to the remains, stone and bone tools and artifacts including figurines have been found at the site. 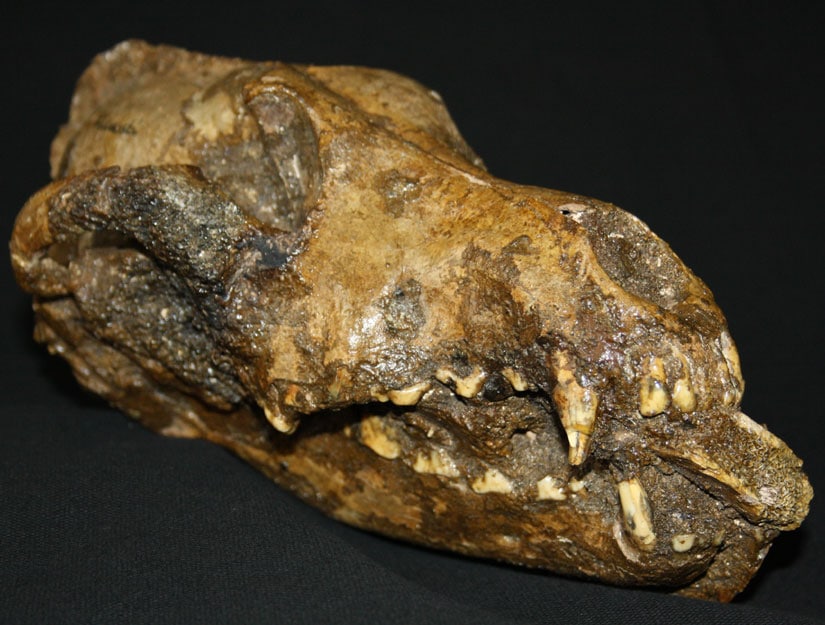 The Look and Lifestyle of Prehistoric Dogs

Paleontologists who studied the remains of the three dogs found at Predmostí first had to determine whether they were wolves, dogs, or some other type of canid.

The skulls of the dogs show clear signs of domestication. They are much shorter than those of wolves, as are the snouts. The brain cases and palates are wider than those of wolves. The shape of the skulls is similar to that of a Siberian husky, but larger and heavier. The researchers determined the dogs were large in side – nearly 80 pounds – with a shoulder height of at least two feet.

They also determined the Paleo dogs died when they were between four and eight years of age, and broke many teeth during their lifetime.

Based on what is known about the lifestyle of the people who inhabited Predmostí, the researchers believe these dogs were used to help move heavy objects like mammoth remains, firewood and equipment.

It’s assumed that since mammoth meat was a primary source of nutrition for the humans at the site, the surplus meat was fed to the dogs.

One of the three dogs found at Predmostí had a mammoth bone in his mouth. Researchers believe a human placed the bone in the dog’s mouth after death.

Also, the skulls of the dogs appear to have been perforated so the brains could be removed. Researchers don’t believe the brains were removed to be eaten, since superior meat was available. They believe instead there may have been a burial ritual involved in the removal of the brain.

According to lead author Mietje Germonpré:

“Among many northern indigenous peoples, it was believed that the head contains the spirit or soul. Some of these peoples made a hole in the braincase of the killed animal so that the spirit might be released.”

Also according to Germonpré:

“The mammoth bone in the dog’s mouth could signify “that the dog was ‘fed’ to accompany the soul of the dead (animal) on its journey.”

Anthropologists who have reviewed these prehistoric dog findings believe the remains show clearly dogs were being domesticated by humans thousands of years earlier than previously thought.

Per Rob Losey, an associate anthropology professor at the University of Alberta:

“The distinctive treatment given some of the remains also is compelling, and this indicates to me that a special connection had developed between people and some canids quite early on — long prior to any good evidence for dogs being buried.”

There’s a wealth of historical evidence of the love of humans for their dogs — much of it in the form of burial rituals.

It’s fascinating to know prehistoric man teamed up with prehistoric dogs and viewed them not only as beasts of burden, but also as cherished companions.