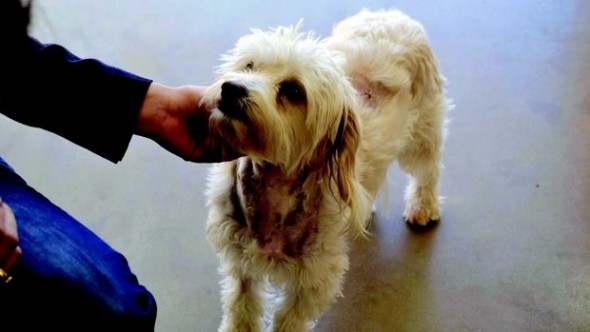 Recently you heard a story about Sophie, a 2 year old Maltese poodle from Santa Fe.  Sophie came to the rescue of her 7 month old sibling, a Maltipoo named Lulu when she was being attacked by a coyote in their backyard.  Sophie sustained serious injuries but survived the battle and is still recovering from her wounds.

Her family has since surrendered both of their dogs out of fear that they cannot adequately protect them from the environment in which they live.  Lulu was adopted quickly, but the staff at Rancho Santa Fe’s Helen Woodward Animal Center are giving Sophie more time to heal before she is placed.  In the meantime, the Center has been absolutely overwhelmed by the response around Sophie.

Calls have been coming in from all over the country, from 11 different states, all people inquiring about adopting the “hero dog”.  Over 60 people have officially applied to adopt Sophie, an application which involves a little more than just filling out a form.  “At this point, we’re asking them to write a 300-word essay about why their home would be the best for Sophie,” animal center spokeswoman Jessica Gercke explained.

The animal center may have to convene a special meeting to decide where Sophie will end up, something that has never happened previously.  “We’d like to unite Sophie with her family on Valentine’s Day,” said Gercke.  The attack happened in mid January, and drew much media attention, mainly because the idea of such a small dog risking it’s life against a coyote has been seen as incredibly heroic.

“It certainly is a story that seems to be resonating with people and moving people,” Gercke said. “I have taken her to a couple of media events, and when I walk through the lobby, people will stop me and ask, ‘Is that Sophie?’”  Fortunately the brave 15 pound pooch is healing well and will soon have her new forever home, hopefully in a coyote free area.