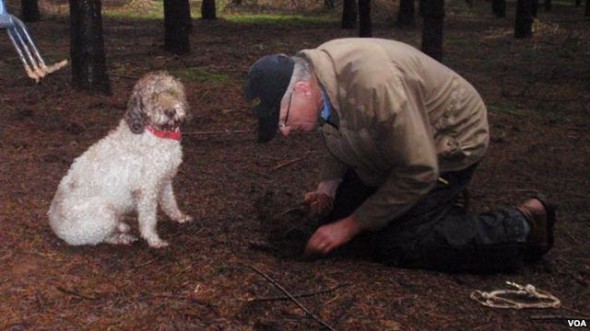 Dogs can be trained to find almost anything, from bombs to disease to missing people, and have saved thousands of lives in the process.  But in Oregon, some dog owners are after an even more elusive prize; the native Oregon White Truffle.  Truffles are mouth watering and flavourful, not to mention valuable, so when a Labrador mix named Boston finds his prize his owner is thrilled.

Mia MacCollin and Boston took part in a 2 day course in truffle foraging at a Douglas fir plantation south of Salem.  In Europe both pigs and special breeds of truffle dogs are used to hunt these unique mushrooms which can bring in hundreds of dollars per kilogram at retail.  In the US however many different breeds are being used says Trainer Deb Walker.

“It’s easy to teach a dog the truffle scent and to find it,” Walker says. “The hard part is teaching the dog to tell you when he’s found it, not to eat it when he’s found it, [and] to keep working for an hour or two.”  The mushrooms grow underground and have a delightfully earthy flavour of forest fruit.   “The taste is like nothing that you’ve ever experienced,” she says. “It’s got an oil that permeates and stays with you. It’s exotic,” says Janet Snazuk, a chef from Gold Beach, Oregon.

Some truffle exporters are relying on rakes to uncover the hidden gems, but dog trainer Jim Sanford says “My feeble human nose cannot differentiate as well as a dog between a ripe truffle and an unripe truffle,” Sanford says. “If you’re just blindly taking them out of the ground with a rake, by the time you disturb them, if they aren’t ripe you can’t put them back. They’re never going to ripen. That’s just kind of how that is.”

So in Oregon at least, dogs will get to do what they do best;  run through the forest in search of their prize, and have a great time in the process.