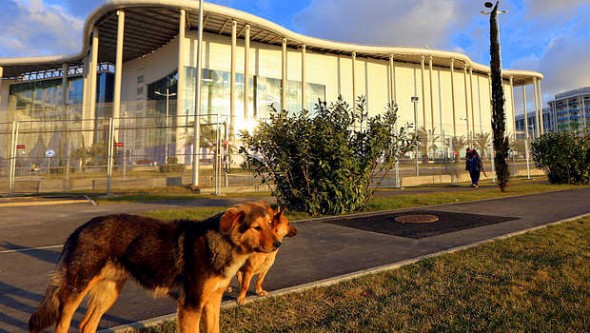 As Sochi, Russia is preparing to host this year’s winter Olympics, the government has launched a horrifying “clean-up” program by killing off the stray dogs they feel make the city look bad. Their actions in this matter are what make the city look bad, and animal lovers are doing their part to rescue as many dogs as they can from painful and unnecessary deaths.

Rather than institute widespread spay/neuter and adoption programs, city officials opted to kill the dogs off instead. If billions can afford to be spent constructing arenas and other venues needed for the event, why not put some of that money to good use and create programs and shelters to deal with animal overpopulation humanely, rather than resort to torturous methods of disposal?

“Let’s call things by their real name. These dogs are biological trash,” said Alexei Sorokin, the owner of Basya (Basia) Services, who is in charge of rounding up dogs and disposing of them.

“A dog ran into the Fisht Stadium, we took it away,” he said. “God forbid something like this happens at the actual opening ceremony. This will be a disgrace for the whole country.”

The only thing that’s a disgrace is Sochi’s merciless and repugnant attitude being put on display for the world! 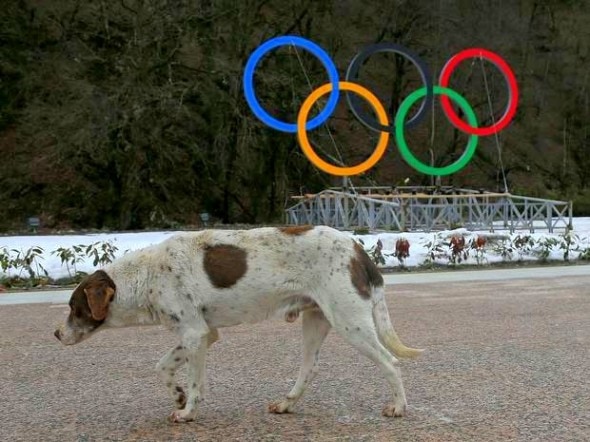 “All stray dogs that are found on the Olympic Park are collected by a professional veterinary contractor for the well-being of the people on the Park and the animals themselves,” the Sochi 2014 Organizing Committee said in a statement this week. “All healthy animals are released following their health check.”

But that’s not what citizens see on a daily basis. Yulia Krasova is one of likely many to witness the death of a Sochi street dog.

“At first I thought someone beat the dog. The dog jumped up and started running around in circles. Then she fell down and started spitting up … I called the veterinarian. He said there is a 100% guarantee the dog was poisoned,” she explained. “They always poison the street dogs here, but in December it got terrible … they began poisoning the animals terribly before the Olympics.”

Vladimir Makarenko, the head of administration in Sochi’s Hostinkski district, said volunteers are welcome to take dogs to a newly opened shelter on the city’s outskirts. But residents are wise to the ploy.

“Over the last couple of days, when this uproar began, they built this new shelter just for the media,” said Vlada Provotorova, a dog-loving dentist who has set up her own make-shift shelter to keep dogs from being exterminated. “I felt like I had to do something. We are protecting them from Basia.” 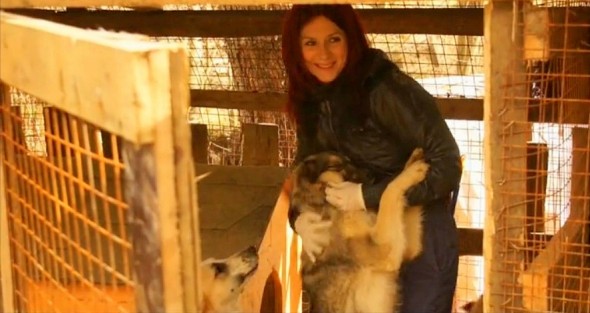 She and several friends spend time and money saving, housing, feeding and sterilizing strays they find. They estimate somewhere between 5,000 and 7,000 have already be executed. She and her friends have save upwards of 100.

“In Russia, you can abuse animals and it’s not a crime. You can buy and adopt an animal and release it on the street; it’s not a crime,” said Dina Filippova, as she mopped out the kennel. “You have no legal obligation to sterilize your dog or cat.”

Filippova and Provortorova are not alone in their efforts or compassion.

“People have hands, legs, brains,” said Valentina Slivat, a Sochi nurse. “But animals have been abandoned. We need to save them.”

While the culling may be enough to present a friendly and clean image to Olympic athletes and supporters, what the city is doing is not only barbaric, but akin to putting a bandage on a broken bone. These dogs will die, but thousands more are still breeding, and there will be just as many fending for themselves on the streets next year. The only way to minimize the stray population is through extensive spay and neuter programs. Incentives can be put into place for citizens to adopt dogs.

“Killing street dogs, whether through poisoning, shooting or other means, is not only inhumane, but ineffective,” said Andrew Rowan, chief executive officer of Humane Society International, which advocates mass sterilization, vaccination, and community education to solve the problem of strays. “While Russia has the world’s attention with the Olympics around the corner, the current dog-killing program will only rouse an international outcry and taint the image of the country.”

Help save the dogs of Sochi by signing the petitions, found here and here.