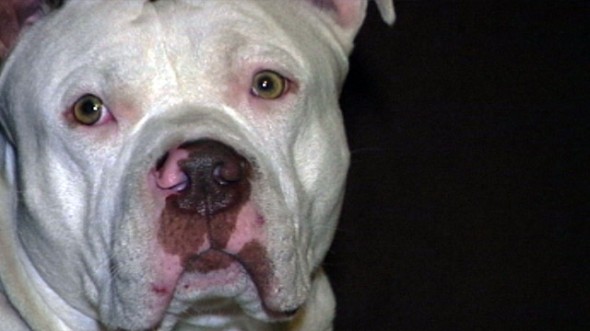 Buster has never been in a home, but he’s never gone without. For five years Buster has been by the side of Joe Groomes, a homeless man. When rescue workers from Carmen’s Rescue spotted Joe and Buster they stopped to see if Buster needed help. What they found was a dog better taken care of than most and they are now doing what they can to help Groomes.

Groomes took in Buster, an American bulldog, almost five years ago and credits Buster with saving him many times. In those five years Groomes has made sure Buster had everything he needed, including shots and medicine. Anything Groomes has, Buster has a well. “Sometimes I’d have to do without, but it’s worth it,” said Groomes. “He’s innocent. He can’t do it for himself.”

When Sheri Kassalias and Kayce Emondson of Carmen’s Rescue spotted Groomes and Buster last Wednesday they stopped to see if Buster needed help. The rescue group often saves loose and abandoned dogs in South Carolina. When they met Joe and Buster they felt compelled to help out a human. They were amazed at how well taken care of Buster was. “You don’t see a dog as healthy as Buster. He looks healthier than my dogs and he’s never been in a home” said Warren Gerhardt. “It’s remarkable that Joe’s been able to do that.”

The rescue posted Groomes and Buster’s story on Facebook and started a donation site to help the two stay in a hotel through Christmas. Buster will also have a full veterinarian check-up where he will be neutered, micro-chipped and receive documented shots. There is also work to find Groomes a job, as people in the rescue community have offered Groomes an opportunity to work with a dog trainer.

If you would like to help Groomes and Buster a chipin has been set up for donations.