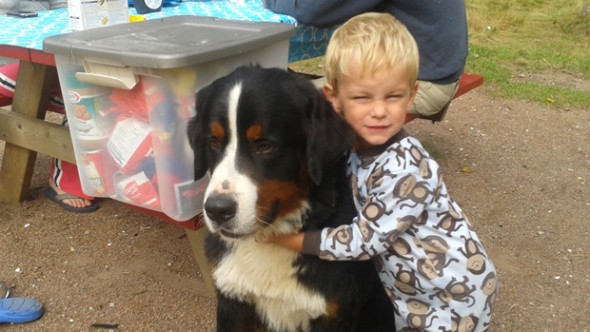 It is a dangerous time of year to be on the water and a Bernese mountain dog is lucky to be alive after a scary incident on a not quite frozen lake in Nova Scotia.  The large dog, named Tonka, was wondering on the thin ice when he fell through into the frigid water and could not get out again on his own.

Fortunately for Tonka and his family help was nearby, but they couldn’t get him out either. “The dog was totally submerged, just his head was above water,” said Terry MacAloney, Enfield’s deputy fire chief. “Two citizens in a canoe, they helped hold its head above water,” which kept him alive until rescue crews could reach him.

After putting on rescue suits made for these conditions, firefighters carefully made their way out on to the ice.  They then were able to pull Tonka out of the water and get him back onto the safety of dry land while his frantic owners looked on.  “They were very relieved, extremely relieved. They were very frantic when the first crews arrived on scene,” said MacAloney.

Tonka and his relieved family went home where he slept by the fire for a few hours and they reported that he was back to normal chasing squirrels by the end of the day.