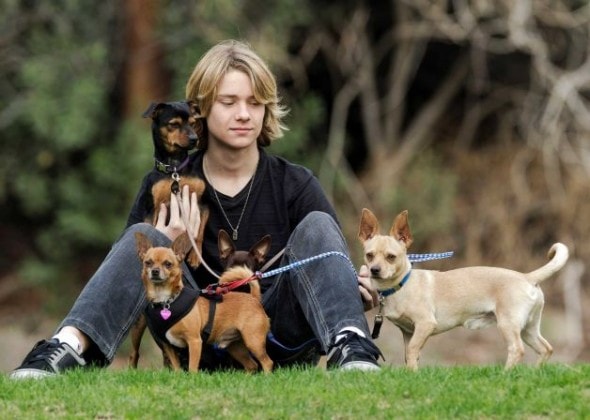 He may not be old enough to vote, but he’s making a difference. Lou Wegner is the person behind one of the fastest-growing animal rescues in the country. His Kids Against Animal Cruelty uses social networking to encourage adoptions at high-kill animal shelters. In the past two years it has helped 20,000 pets escape euthanasia.

A few years ago Wegner believed shelters were safe havens. After he volunteered at one he learned that in fact many dogs and cats have to be put down at shelters. “It was heartbreaking. All these dogs crying in their cages. Knowing they would be put down broke my heart,” he said. Lou started Kids Against Animal Cruelty when he was only 14 years old with some of his friends. His Facebook page started out with just 47 friends and now two years later boasts over 15,000 likes on Facebook.

Wegner, who is an actor, uses his public appearances to bring awareness to his cause. If he’s attending an event where photographers and paparazzi are likely to attend he’ll try to wear a Kids Against Animal Cruelty t-shirt. His goal is to get more people to adopt from shelters, to spay and neuter pets and to educate them about pet responsibility.

Wegner efforts have saved dogs like Tommy Joe, an 11-month-old black lab. When Tommy Joe’s photo was posted on the group’s Facebook page it didn’t get much attention, with no likes or comments. “I thought he was doomed,” said Wegner.  Tommy Joe was on death row in a rural shelter in South Carolina. Wegner started writing on Tommy Joe’s post and spreading the word about him. Wegner’s extra effort paid off when a group called For the Love of Dogs in Chester, South Carolina  saved Tommy Joe.

Since Wegner’s starting of Kids Against Animal Cruelty, other teens have set up chapters of the group around the country. Wegner hopes to have a chapter in every state eventually and make a bigger difference. “They euthanize just as many animals every day as we have saved. It’s like throwing a Band-Aid in a river,” Wegner said. In addition to trying to save as many animals as he can, Wegner hopes to educate children who commit cruelty to animals. Lou would like to make the children who commit  cruelty to animals have to witness what happens in the euthanasia room at a shelter.

For more information on Kids Against Animal Cruelty check out their Facebook page.