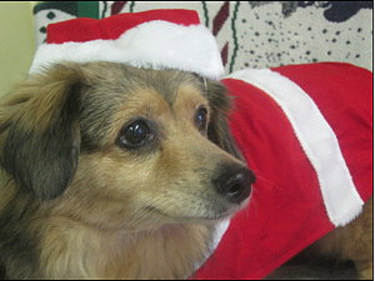 When a shelter dog has a medical problem it makes them harder to adopt.  When 10-year-old Maddie came to the Stafford County Animal Shelter she had a tumor on her belly. One generous donor offered to pay for Maddie’s surgery so she could have a better chance at finding a home this Christmas.

Maddie arrived at the Stafford County Animal Shelter in October. Her chances of finding a home were not looking good. She was a senior dog and she also had a tumor on her belly. “[People] were a little leery of adopting a dog that had a possible medical problem,” said Denise Spicer, assistant manager for the shelter.

Surgery to remove Maddie’s tumor was going to cost over $1,000. It’s not often someone is willing to take on a dog that has that kind of additional expense. It is even rarer for someone to foot the bill of such a surgery for a dog that isn’t their own. That is just what one Good Samaritan did though.

On December 6th Maddie got an early Christmas gift when she had her surgery thanks to a generous donation from an anonymous donor. Maddie recovered quickly from her surgery. Maddie’s luck continued when this past Saturday she was adopted.  Now Maddie will spend the holidays with her new family, including a new playmate in the family’s 8-year-old dachshund.