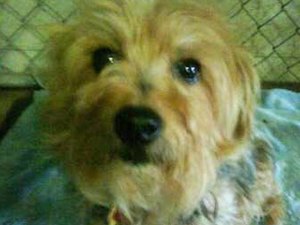 A six-year-old silky terrier named Ira will no longer be suffering relentless pain thanks to a kind-hearted stranger who is footing the entire bill for her operation.

Ira was taken from her Massachusetts home recently when her owner was arrested, and has been in the care of Norfolk police officer Hilary Cohen.  Ira has kidney stones in her bladder, which causes immense amounts of pain.  Cohen didn’t think there was anything that could be done for the poor dog, because medical treatment would cost well over a thousand dollars.

“The expenses of being able to bring her back to a good quality of life, the costs are exorbitant,” Cohen said.  “I don’t know too many people who have the resources right now to be able to pony up a large amount of money.”

A woman heard about Ira’s predicament on the news, and walked into the police department bearing $1400 in cash.  She never gave her name to the dispatcher who accepted the money.

“This person found it in their heart to donate such a sizeable amount of money, to take care of this little dog,” said Kathy Connerty of the Acorn Animal Hospital.  “It’s really, it’s a miracle.  It’s a miracle, and it’s so heartwarming.”

Officer Cohen was also touched by the remarkable generosity.

“In our profession it’s not often that we see generous and kind people, so it’s very nice to see that side of the public.”

Cohen hopes the benevolent benefactor will return to the station so she can thank her in person.