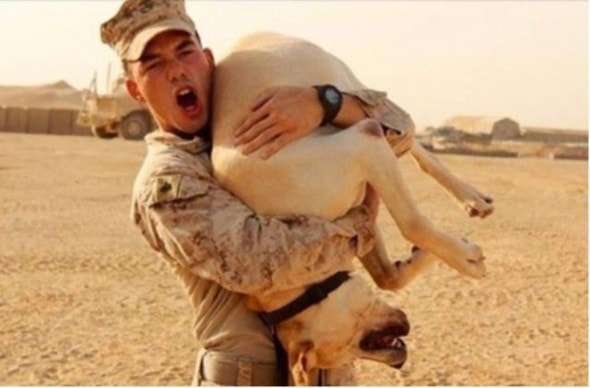 Lance Corporal Andrew Harmon has been home from his tour of duty in Afghanistan for a couple of years now.  It’s also been a couple of years since he saw his service mate Rebel, a military dog he spent virtually every moment with while there.  Harmon and Rebel have been reunited, and Harmon says his prayers have been answered.

When Harmon joined the Marines, he hadn’t imagined himself as a dog handler.  However, he found out that by getting into a dog handler’s position, he would get to be on active duty.  According to Harmon, when he went to be paired with his new charge, it was Rebel that chose him.

Harmon and Rebel spent every moment together while overseas.  For Harmon, it was his first tour of duty and it was Rebel’s second.  Truly, they are what some would call a bonded pair.

“I’ve had numerous dogs before, but the bond wasn’t like this. You know, I can’t describe it,” said Harmon.

After taking a massive concussive blast from an explosion, Rebel was left badly injured.  He suffered a stroke and had to be retired and sent back to the United States.

While home, a tumor had been found on one of Rebel’s knees and needed to be removed.  The woman Rebel was staying with just could not afford to pay for the surgery.  That’s when she called Harmon and got the pair back together.

“It’s just indescribable,” Harmon said. “It was almost like when I had my daughter or when I got married… something like that. That’s the best way I can describe it.”

Rebel and Harmon are together now.  Rebel is healing up nicely, and the two help each other out coping with post combat stress.  Harmon is now looking for ways that he and Rebel can do some good locally.

43 thoughts on “Answered Prayers for Marine Reunited With Service Dog”