Heroic army veteran Aaron Schneider saved the life of a beagle that had been struck by a car and left to die when he stood in the way of oncoming traffic and got the dog off the road.  He waited for three hours in the rain until they could be picked up and taken to a veterinarian.  When the dog is well, Schneider will also be adopting him.

Schneider crossed three lanes on Interstate 470 in Kansas City, Missouri to get to the badly wounded beagle.  He tried to pick the dog up, but he was in an extreme amount of pain and very defensive.  Schneider was finally able to coax the dog over to the side of the highway.

“My combat lifesaver training kicked in and I’m thankful I was able to use it to help him,” Schneider said.  “Having served in Iraq, you see a lot of loss, which is one of the reasons I was determined to see him make it.” 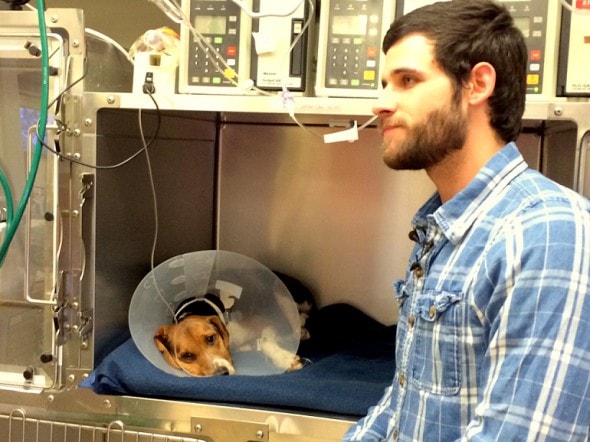 He called 911, but they just referred him to animal control, who apparently could not be bothered to help.  So Schneider waited in the rain for three hours until a friend with a pickup truck could get the dog medical care.  The beagle was put on a makeshift stretcher and taken to Lee’s Summit Animal Hospital, and then onto BluePearl once he was stabilized.

Vets found that the dog had a torn windpipe, broken ribs, internal bleeding, and road rash.  They are calling him Buster, and believe he will recover.

“Without question, had Mr. Schneider not helped Buster get to a veterinarian, he would have died from his injuries,” said Dr. Brian Lucas, an internal medicine specialist with BluePearl.

No owner for the dog has been found, so Schneider says he will be bringing the dog home with him once he recovers.