Two kids in Chino Hills, California are being credited with helping to save a three-year-old Cocker Spaniel who was being badly beaten by her owner.  The kids filmed their neighbor in the act while their mom called the authorities.  The man has been charged with animal abuse, and the dog has been adopted by a loving family.

Back in May, the family heard a dog crying out in pain.  When they looked out the window, they saw the dog, named Mookie, being beaten by their neighbor, 21-year-old Qihui Zhai.  She tried to get away, but the man continued to hit her with a stick.

The mom called the local humane society and the SPCA, and the kids grabbed their camera and got his heinous behavior on film. 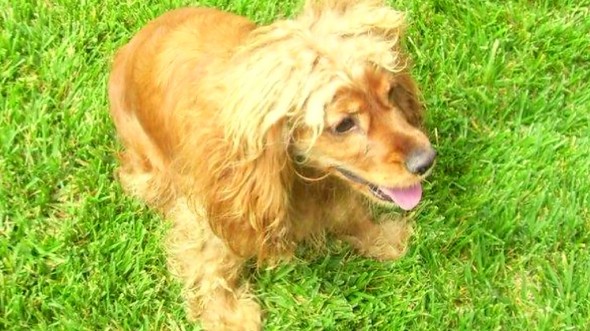 Humane Officer William Taber arrived on the scene to find that in addition to having been beaten, Mookie was being kept inside a “very small, feces-infested wire pen.”  He took her to the Inland Valley Humane Society & SPCA, where she was examined and treated by a vet.

Mookie has physically healed.  She has found herself a new home where she will be cherished, and hopefully in time, her mental trauma will subside.

On June 6th Zhai was arrested and charged with one count of felony animal cruelty.  His arraignment is scheduled for June 30th.

“We are never surprised by the ingenuity of today’s youth,” said Beth Les, Supervisor of Animal Services of the Inland Valley Humane Society. “Their quick thinking not only saved this dog from a lifetime of abuse, but they were able to ensure we had the evidence to pursue criminal charges against the abuser.”