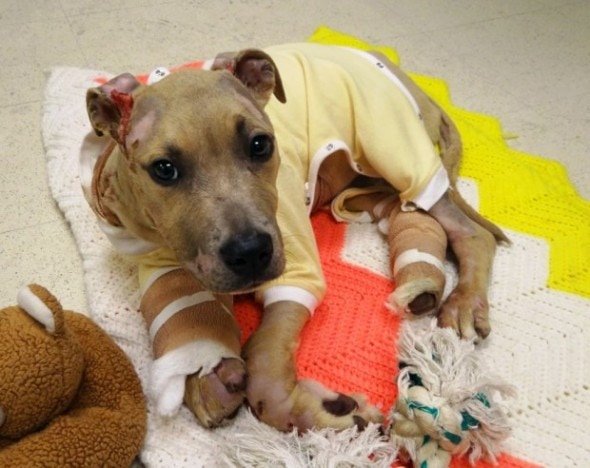 The mystery behind Trooper’s horrible dragging down Interstate 55 in St. Louis has been solved and an arrest has been made.

Last month Victor Washington unknowingly dragged Trooper behind his truck. He recently came to suspect that the puppy might be the one he gave to his ex-wife’s daughter just months earlier. Washington tipped off police. Thursday police arrested Washington’s ex-wife on suspicion of felony animal abuse.

Washington bought the puppy for his ex-wife’s 5-year-old daughter several months ago. When he heard from a friend of a puppy in need of a home he gave it to the girl who had been talking about wanting a dog for a long time.

In the weeks leading up to the incident Washington’s ex-wife had called him saying she wanted him to take the dog back because it was sick and too shy. Washington admits to brushing off her request because he was upset she wanted to return a dog she had asked him to get.

Police believe Washington’s ex-wife tried to return the puppy by having her 13-year-old son tie Trooper by a leash to Washington’s truck around 10 p.m. on November 20th. Washington got into his truck the next morning and drove off not having seen the puppy. Security video backs up Washington’s story.  As Washington drove down Interstate 55 a woman driving alongside him alerted him to pull over. He was horrified by what he found when he pulled over. “I was just so devastated by what I saw,” he said.

The 5 ½ month old puppy, now named Trooper, was taken to the Humane Society of Missouri. Trooper has undergone multiple surgeries since the incident. He still has some treatment and rehabilitation to go before he is adopted.

As pictures of the dog came out in the media Washington thought the dog looked familiar. He texted his ex-wife saying, “Please tell me you still have that dog.” She told him she did. When investigators met with Washington and his landlord to watch surveillance video, Washington recognized his ex-wife’s car pull up in the video. Prosecutors haven’t determined whether the ex-wife’s role was accidental or willful, which will affect her charges.

Washington is still very distraught over the incident. “I really feel like crying right now,” he said. “This whole situation is just so sad. Some people said I’m guilty of this, but if I would have known that dog was back there, I never would have drove off. It’s like a nightmare every time I’m riding down 55 that I don’t think I’ll ever forget.”