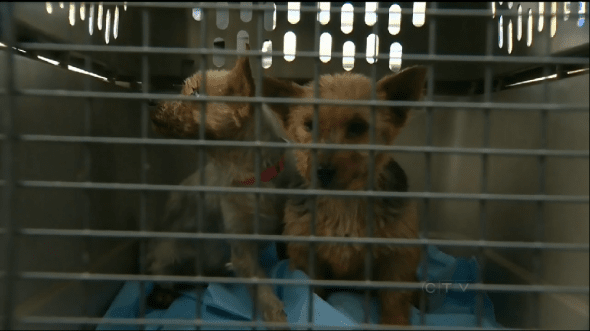 Authorities in Monteregie, Quebec have rescued at least 90 dogs in from a large-scale commercial breeding facility.

The Montreal SPCA and the Humane Society International/Canada worked together to seize the dogs, which included mostly Chihuahuas and Yorkshire Terriers. The dogs were found in substandard living conditions and are now in the care of the SPCA.

“These dogs were living in unacceptable conditions,” said Alanna Devine, with the Montreal SPCA. “For example, the smell of urine and ammonia was extremely strong. And, as there was no health care, they have multiple health issues, including ear and dental problems.”

The dogs are now getting the proper veterinary care that they need. The SPCA hopes to have the dogs healthy again in the next couple weeks and once they are healthy they will become available for adoption.

In order to not compromise the court case not much information about the breeder has been released. The breeder has already been fined for breaking Quebec’s animal protection laws. The breeder is facing up to $75,000 in fines and a lifetime ban on owning pets, but will not face any jail time.

Weak laws and enforcement has been an issue for Quebec says Rebecca Aldworth of the Humane Society International.

“Quebec remains the puppy mill capital of Canada,” said Aldworth. “The laws have been improved, but there’s still a distance to go. On top of that, the SPCA and SPAs here in Quebec have very little money for enforcement.”