The dedication of the firefighters in Austin, Texas was exemplified when this shot was captured after Michael Cooper and Matt Harvey pulled a dog swimming for his life out of flash floodwater and to safety on dry land.

Central Texas was devastated by flash floods that swept across the area after 15 inches of rain fell overnight on Thursday. Department photographer Preston Culver was with crews as they went door to door rescuing residents from their homes. The dog, whose name is Panda, was spotted by Cooper and Harvey in about 12 feet of water that had risen from nearby Onion Creek.

“The dog wasn’t with a family,” Battalion Chief Thayer Smith said. “It was out swimming in the water and as the crews were rescuing people they rescued that dog.”

Panda and all the other animals rescued were taken to the local humane society until their families could be located and notified.

“Dealing with pets is nothing new for us,” he said. “It’s just something we do.”

The deluge inundated entire neighborhoods, forcing people to their roofs, and drivers to desperately cling to treetops to hours as they waited to be rescued. Officials say more than 100 residents had to be saved.

But as quickly as the flood came, it vanished. After 24 hours, all that remained were homes that had been ravaged by the water.

“There’s nothing left,” said Micki Ramirez, whose home of 10 years was destroyed. “I don’t want to go in until someone comes and takes it away. Just take it all away.”

Two people sadly lost their lives in the storm, but many others, animals included, were saved because of the bravery of Austin’s rescue teams. Now it is time for residents to salvage what is left of their belongings and rebuild their lives. Anyone wishing to help by making a donation may click here. 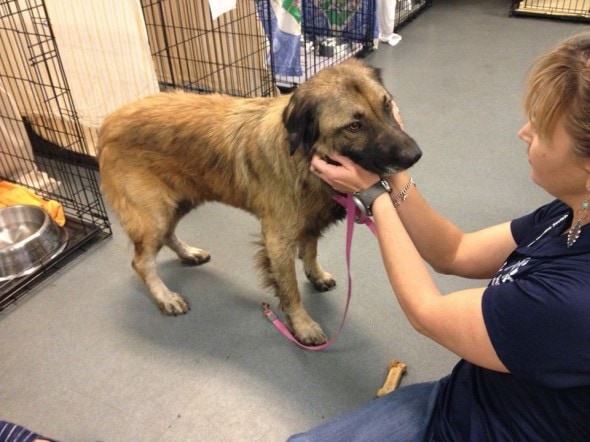 “We’re happy to report that Panda is doing great and has been staying with our friends at the Austin Humane Society until she can be reunited with her owners,” reads the photo caption on the AFD’s Facebook page. “Thankfully, Panda has a microchip so they’ll be easy to track down. (This is a great example of why microchipping is SO important–your pets can’t speak for themselves.)

“Many, many thanks for all the kind comments and messages we have received about our folks who rescued Panda. As they have said, “we were just doing our job” but we think Panda might say otherwise!”