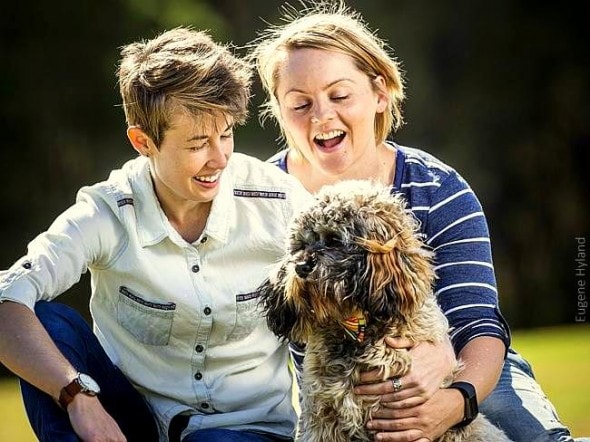 Sheree and Tara with Monte.

At Life With Dogs, we always tell people “don’t shop – adopt.”  But many who want a pet don’t live and breathe this motto the way we and our fans do.  When an Australian couple bought a Cavoodle from Pets Family in Melbourne, they were devastated by the horrific condition he developed.  The store offered to replace him, but his moms said that a family member can’t be replaced, and now the shop has to pay up.

“He’s not just a pet, we call him our little man,” Tara Mackey told the Herald Sun.  “He is part of the family.”

She and Sheree Bolton bought eight-week-old Monte from Pets Family in January 2014.  Within a few short weeks, their precious pup developed breathing trouble and began screaming in pain.  Vets operated on him, but were unable to pinpoint the disorder.

The manager of the pet shop offered the women a refund or a replacement dog.  But that’s not what they wanted, because they adamantly believe “you get a pet for life.”

Eventually little Monte was diagnosed with portosystemic shunt, a congenital condition where blood bypasses the liver and continues to circulate through the body without being filtered and cleaned.

He survived a life-threatening surgery, but will always have lasting effects from the disorder.

A tribunal determined that a refund was not enough, and ordered Pets Family to pay the women $7884.40 for Monte’s medical bills.

“It’s not like a car where you can go and get another one,” explained Victorian Civil and Administrative Tribunal Senior Member Stella Moraitis.  “I can’t ignore the fact that when you sell a dog, you sell a member of the family.  If a child gets sick you don’t take it back to the hospital, do you?”