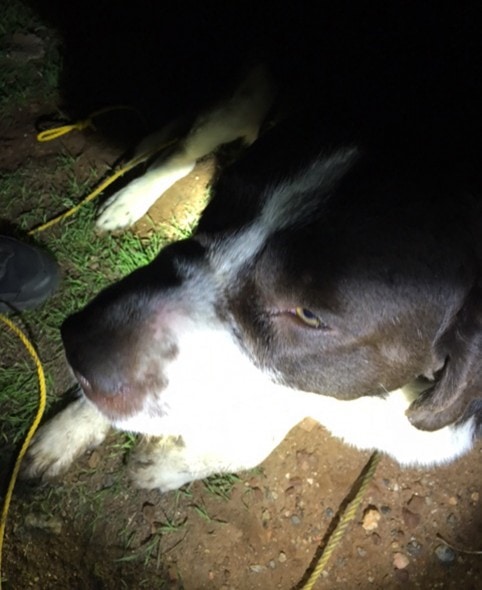 An animal cruelty investigation is underway in Riverside County, California.  An unidentified dog was found with his muzzle wrapped up with rope.  The dog had been abandoned, and now authorities are asking for help from the public in identifying the dog and finding his abuser, so justice can be served.

The dog was discovered by a woman around 7 pm yesterday, while walking along Granite Hill Drive near Pedley Road.  The dog is assumed to have been dumped in that area very recently.  The woman that came across the helpless dog called the Riverside County Department of Animal Services.

A sheriff’s deputy was sent to the scene, and managed to get to the dog and cut off the ropes binging his mouth closed.  According to John Welsh with county animal services, the rope was tied so tightly, it was almost impossible to get it off.

“There was very little space for him to get his knife between the dog’s muzzle and the rope to cut it.  That’s how tight it was around him,” said Welsh.

The dog is approximately 2 years old, and other than the obvious, was in pretty decent physical health.  He’s said to have a very sweet disposition, despite the abuse that he’s had to endure.  He has been taken to the Western Riverside County/City Animal Shelter in Jurupa Valley.  While there he was checked for a microchip, but does not have one.

Authorities are asking for any and all information that anyone may have on the dog.  Who is he?  Is there a family out there looking for him, or was he horribly abused and dumped off by some one?  Animal services wants to know, and they are asking anyone with information to come forward