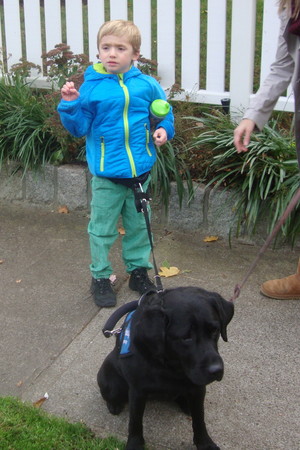 A five-year-old autistic boy has been reunited with his missing service dog after nine long days.

Mark Fontana relies on Echo, a black Lab, for his safety and well-being.  Mark was diagnosed with autism spectrum disorder at the age of 3. He is unable to speak and is prone to running away. Echo is always by his side keeping him safe.

On the night of November 6th Echo got out of the Fontana family’s home without her service vest on. For nine days Echo was missing, not only worrying the family about Echo’s safety but leaving Mark completely lost.

“Mark doesn’t speak. He doesn’t communicate that way,” said Mark’s mother, Emily Fontana. “Sometimes he just ends up running – to the street, to water. But he can communicate, he just needs the keys to unlock it. Echo was one of those important keys.”

On Friday a woman who had seen stories about Echo on the news found Echo wandering around her neighborhood. She contacted Emily Fontana with the good news.

“They said ‘I think I might have your missing dog,’ and my heart stopped,” recalls Emily.

Echo was in excellent condition when she was reunited with Emily who walked Echo to Mark’s school on Friday afternoon to surprise him. When Mark saw his beloved service dog he began laughing and smiling, both things Emily hadn’t seen her son do since Echo went missing.