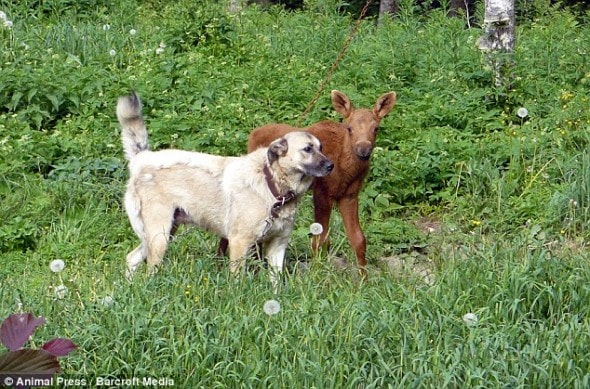 Freddie is a young animal that loves to play with his dog friends, go for car rides and sleep indoors.  You might think he is an average puppy, but you’d be wrong.  He’s not a dog – he’s a baby moose!

Freddie was born a triplet in Gauja National Park in Vidzeme, Latvia.  His mother abandoned her young calf, and he was rescued by caretaker Velga Vitola.  She gave the struggling youngster milk, and raised him as one of her own.

Vitola has rescued a number of animals and taken them into her home, among them a couple of bears.  She even let the cubs cuddle up next to her in bed.  Sadly, one of them died, but the other bear, Ilzite, is now 10 and lives in a caged-in area in Vitola’s backyard.  Ilzite no longer canoodles with her, but the pair are still affectionate.

“It’s a kiss for mom,” Vitola explained as Ilzite gave her gentle licks through the fence.

Vitola has had serious health issues, but remains a devoted caretaker in the park.  She loves the real relationship she is able to forge with the animals.

“People have masks.  We go to work, to the theater, we drive our cars, and we have masks on.  We are not ourselves.  But when an animal looks at you, he is himself.  Without a mask.  That’s a thing we could learn from them,” Vitola explained.

She now has her hands full with Freddie, who seems convinced he is a canine.  But unlike some dogs, he doesn’t seem to mind hanging out with a feline friend once in awhile.