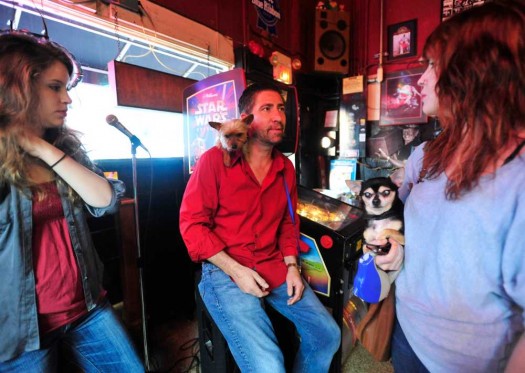 Steve Valenti DiGiulio and his Yorkshire terrier Caesar have been hitting the streets of Athens, Georgia to spread the word about helping dogs.

While Caesar is enjoying the good life with DiGiulio, many are not so fortunate.  DiGiulio found service dog Caesar on Craigslist a year and a half ago.  Since then, Caesar has become somewhat of a celebrity to local residents due to preferred mode of transportation – DiGiulio’s shoulder.

“I got Caesar and started putting him on my shoulder.  I taught him how to swim, and I got him comfortable with riding in the bag on my motorcycle, and I can talk to him while we’re riding,” DiGiulio said.

People took notice, and the pair’s walks were often stopped by people wanting to take a picture.  Pedestrians even wanted shots of the little dog sitting atop their shoulders.

“It attracts attention because it’s not often you see a dog sitting on a guy’s shoulder,” DiGiulio commented.  “You see a parrot, a monkey or whatever else, but you never see a dog who can balance so well.  It’s also good for socialization for Caesar because the more socialized your dog is, the more calm he will be in public and around other people.”

A friend suggested that DiGiulio start a Facebook page for his little pal, which he now uses to share pictures of Caesar ‘shoulder-surfing,’ as he calls it.  Residents have responded positively, and Caesar now has over 700 friends.

DiGiulio has used the attention garnered by Caesar for a good cause.  He started the Caesar Athens Dog Support Foundation, and intends to make it a not-for-profit organization.

“Our mission statement is going to be to basically help dogs in any manner we can… to benefit their health and safety and promote how dogs think,” DiGiulio stated.

One of the issues currently being tackled is dog-walking for owners who must be gone for many hours at a time.

“What happens when the dog is left at home alone is that they can’t go to the bathroom. I like to try and think about what the dog is thinking, and in his mind, he’s trying to be the loyal dog, even if the owner is not there, and he goes, because his body function is just going to do it. Now the dog is stressing before he even gets yelled at, because he thinks he’s done something wrong. So when the master comes home, the dog is going to expect to be disciplined, even if he isn’t. It still causes the dog stress. It could cause the dog to go through depression, and it’s terrible to think what we’re putting that dog through,” DiGiulio explained.

He plans to create a volunteer-based dog-walking program called No Dog Left Behind.  “Even if it’s a five- or ten-minute walk.  It’s all going to be on a volunteer basis,” DiGiulio said.

The foundation’s first fundraiser was held last week to raise money to help a six year-old Chihuahua with cataracts.  Many local businesses have already donated money for Sanchez’ important surgery.  A raffle may be held next month, with a PayPal account likely set up to take donations.  Until then, people can send money to Wells Fargo branches to help Sanchez.

“We’re looking at innovative ways to deal with issues that are going on with dogs,” DiGiulio said.