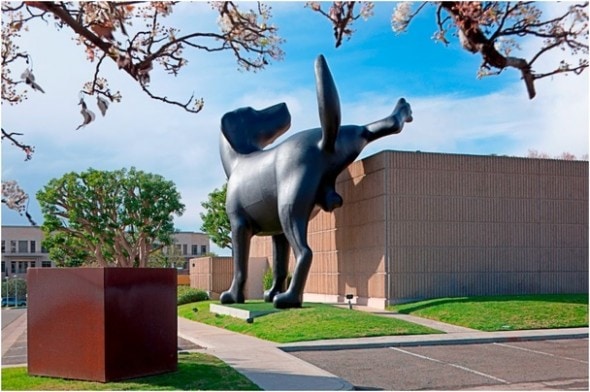 Usually when a dog gets caught relieving itself someplace like the side of a building, it gets scolded.  But this peeing pup is getting lots of laughs and praise.

The gigantic dog, created by Richard Jackson, hovers over the façade of the Orange County Museum of Art in California.  The 28-foot tall “Bad Dog” is part of Jackson’s retrospective show, “Ain’t Painting a Pain.”

Inside this matte-black Labrador retriever is a hose that every so often lets flow a stream of yellow paint on the side of the building.

Some aren’t sure what to make of the monumental mutt – is this Jackson’s take on the art world, or just a whimsical display, nostalgic of the carefree world in which dogs live? 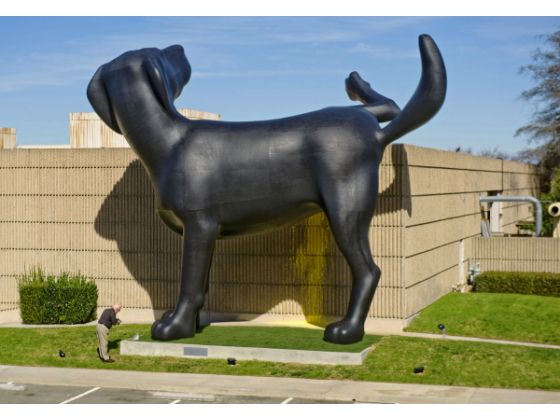 “The work, that literally leaves a golden mark on the building’s facade, is a great conversation piece for the exhibition, but it also seems to criticize the architecture of the museum.  As the whole facade has no windows or doors it doesn’t have any connection with the space around it.  These kind of spaces ask for disrespectful treatments.  Although the artwork is not very kind for the building, we have to conclude that it obviously shows the courage of the museum board that commissioned this work.”

Other exhibits in this show include a room plastered with 1,000 hand-made clocks, a car engine that squirts paint on the floor, and a model deer that shoots paint pellets from its hindquarters.  Reviews of his show will be accepted until March 10th, and the author of the cleverest comment will be selected to help create a piece using one of Jackson’s “painting machines.”

Kids’ reviews of the “Bad Dog” are already in – they love it!