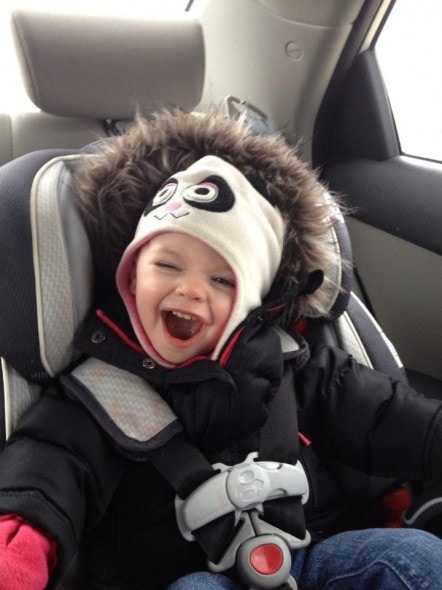 Twenty-month-old Layla Sawicki is like most other kids her age – she likes playing with bubbles, splashing in water and kicking up the dirt.  But there is one thing that makes her a little different – she has epilepsy.  Her parents are saving for a service dog to help them manage their daughter’s condition.

Layla’s first seizure struck when she was only four months old.  By seven months she was clinically diagnosed with Primary Generalized Epilepsy.  Because seizures are easily triggered by threats to her fragile immune system, she goes out only for medical appointments.

Seizures tend to strike while Layla is sleeping, so she snoozes between parents Jennifer and Travis.  During the day, she is rarely out of their sight – they never know just when a seizure will happen, but they know what to expect:  Layla’s eyes roll back and her tiny body jerks.  The scary episodes can last up to an hour, and sometimes require a breathing tube.

Her parents cannot detect an oncoming seizure, but a service dog could.  Some dogs can smell the chemical changes that occur right before a seizure strikes, and can be trained to alert people when it’s about to happen.

“It’s one of the most beneficial things that we as humans have figured out, that dogs know how to do this,” Jennifer said.  “My daughter can be in the next room, and I have no idea anything is going on. [If she has a seizure], I could walk in there 10 minutes later, or the dog barks, and I’m there in a second. That could potentially be something that saved her life…. That’s absolutely amazing.”

It can cost about $22,000 to raise and train a service dog for a child.  Nonprofit organization 4 Paws for Ability will help the Sawickis get a service dog for Layla.  They will contribute $9,000, but the family must come up with the remaining $13,000.  So far they have raised about $5,000.

Should they raise all the money, 4 Paws for Ability will choose a dog for Layla and spend nearly a year raising and training it.  This could save Jennifer and Travis a lot of worry, and perhaps they can reclaim their bed.  In addition to being a potential lifesaver to Layla, this dog will serve as her friend.

While the family works to raise the money needed to bring home a new caregiver, Jennifer just enjoys watching her daughter grow up.

“Layla is probably the happiest kid out there,” she said.  “Her personality brightens my day.”

Those interested in donating to Layla’s cause may visit: