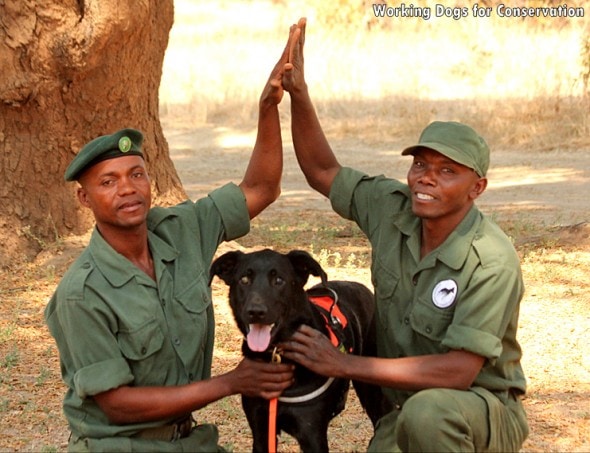 Ruger, once considered a “bad” dog, is perfect for his job.  Because he had a very rough start in life, he was aggressive and would snap at people, but part of his personality has made him easily trained to become the first anti-poaching dog in Zambia, where he is now responsible for putting 150 poachers out of business.

“Bad dogs have an overwhelming desire to bring you things,” Megan Parker told The Guardian. “Dogs love telling you what they know. They have an inability to quit.”

Parker is the director of research at Working Dogs for Conservation in Montana.  She searches shelters for difficult, “unadoptable” dogs who’d have no problem putting poachers in their place.

Ruger was born on the Blackfeet Reservation in Montana.  When he was young, his owner shot his littermates, but he was able to flee.  He wound up in a shelter, where he was noticed by a trainer who told WD4C about him.

At first, Ruger was aggressive, and would bite people.  Parker had a hard time getting him to the vet, and he hated small spaces.  But there was something about him that encouraged her to keep working with him.  However, there was something else that stood in Ruger’s way of becoming an anti-poaching dog at all.

“Early on in his training, Meg was under pressure from her colleagues to decide if Ruger would make the cut,” said Pete Coppolillo, executive director at WD4C. “If a dog doesn’t work out, we make sure they have a forever home. We all wondered if Meg should start finding a place for Ruger, who was losing his sight.”

But she knew that Ruger had the drive necessary to make the cut.

“These dogs have an unrelenting drive,” she said. “For a dog that doesn’t stop, you can train that dog to bring you things.” 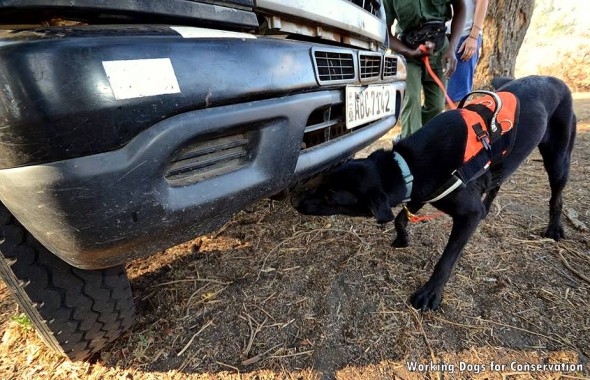 Parker was eventually able to match up Ruger with the Delta Team scouts, a law enforcement unit operated by the South Luangwa Conservation Society and the Zambia Wildlife Authority.  The scouts had little experience with dogs, and were leery of the idea that a dog could help.

Ruger proved his worth at his first day on the job.  Roadblocks were set up to search vehicles for illegal paraphernalia.

“It takes humans an hour or more to search a car,” said Coppolillo, “whereas it takes dogs three to four minutes.”

Ruger sat down and glared at one of the passing cars.

Several pieces of luggage were inside the vehicle, and the scouts who searched them came up empty-handed.  But Ruger kept his eye on one bag, which contained a matchbox in a plastic bag.  Inside of it was a primer cap, which ignites gunpowder in the illegal muzzle loaders that poachers rely on.

“At that moment, everyone believed that Ruger knew what he was doing,” said Coppolillo. “They learned to think of Ruger as a colleague.”

Now he’s been a valuable team member for a year and a half.

“He’s a hero who’s responsible for dozens of arrests and has convinced many skeptics of his detection skills,” Coppolillo noted. 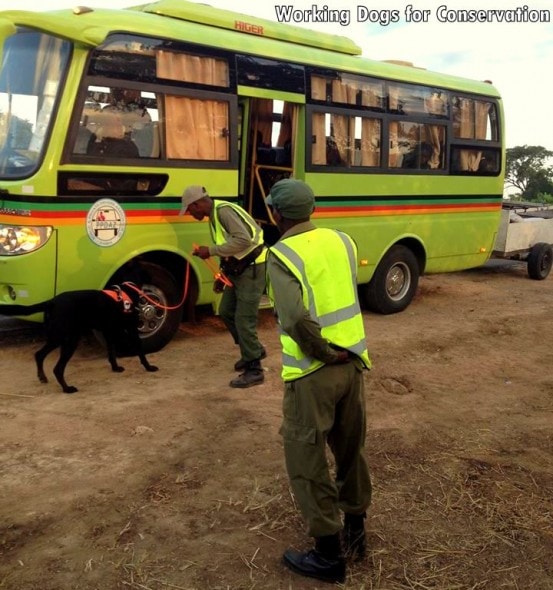 Some people likened his skills to witchcraft, but at a courthouse demonstration, a scout hid a piece of ivory and Ruger found it in only a couple minutes.  And his deteriorating vision hasn’t impaired him one bit.

“His skills have sharpened.  He’s working with a few younger dogs, who are somewhat goofy and get distracted like most puppies do,” Coppolillo said. “Ruger remains focused despite many distractions, such as having wild animals close by. Baboons are the worst. His lack of eyesight works in his favor because he almost entirely focuses on his sense of smell.”

Because the work is very dangerous, Ruger does not have to work every day, and Godfrey, a scout, rewards him with games of tug-of-war when he nabs someone.

“Poachers are well-armed and well-trained,” Coppolillo said. “African elephants don’t live throughout the continent. Poachers kill elephants where they reside and smuggle them to places where they don’t live to throw law enforcement off their tracks.”

Though it is illegal to hunt within South Luangwa National Park’s boundaries, poachers do it anyway, and over the years, many scouts have colluded with them.  Good scouts are hard to come by, and in Africa, it’s even more difficult to find dogs like Ruger.

“Good dog selection is absolutely essential,” Coppolillo said. “Village dogs simply don’t have the drive to do this kind of work. There are only a handful of suitable and reputable kennels in Africa. Most are focused on selling security and military dogs, so they’re not as well socialized as a conservation dog needs to be. Plus, they generally sell those dogs for much more than what it would cost us to source a dog in the US.”

Parker will continue her dedicated work of finding suitable American shelter dogs to send to Africa to keep saving the lives of countless elephants. 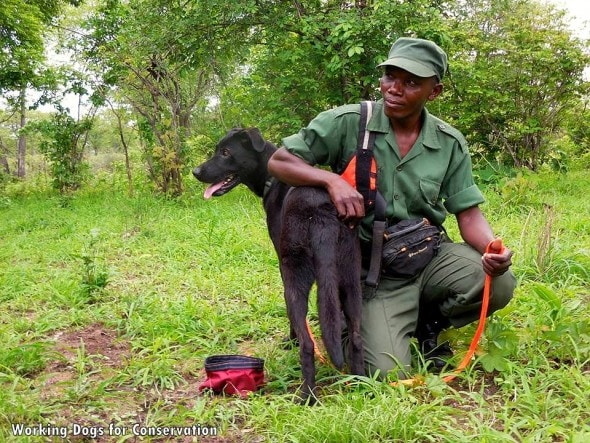