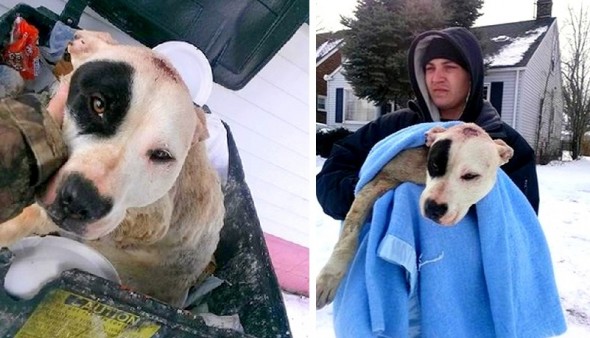 A puppy dumped in a Detroit family’s garbage can and left for dead has been rescued, and now Precious is on the road to living the kind of life she deserves.

The nine-month-old pit bull mix was covered in over 70 bite marks, and has a torn ear and other injuries.  A blood trail found near the garbage can leads police to suspect that she may have been abandoned on the street, and believing she was dead, someone may have chucked her in the bin in front of a family’s home.

A member inside the house told WXYZ that they could hear the dog crying inside the can.  They were scared to go near the dog, unsure of how she would react to people.  They called a local shelter for help, but because it was Sunday, the shelter was closed, so they just left her in the garbage can.

By Monday, Detroit Pit Crew Dog Rescue had heard about the pup’s discovery.  Crew members rushed over and plucked the bloodied, freezing from on top of the trash. 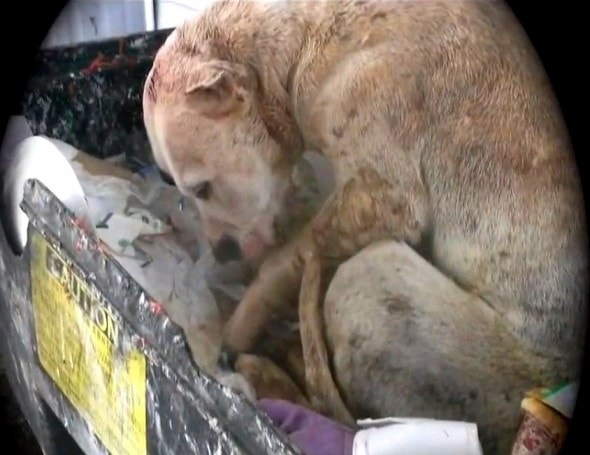 “She’s all kinds of messed up,” said volunteer Joshua Barton.  “She let me pick her right up, and she’s a really sweet dog.”

The team called her Precious.  They believe based on her injuries, she was being used as a bait dog.  But because she was rescued, they consider her one of the lucky ones.  They gave an update of her condition on Facebook:

“She is doing well considering everything she has gone through, and she is HW negative. The vet is doing some blood tests, and they gave her a bath so that they could wash off the dirt and blood and get a better look at her wounds. She will probably need stitches and some good antibiotics as she does have infection from some of the older bite wounds. We will keep everyone updated.”

A fundraiser with a goal of $1,000 was started for her medical care, and has received over $8,000 in donations.

Though she had to have stitches and is very sore, rescue group leader Theresa says Precious is doing very well.  She is learning how to socialize with other dogs and cats, and will hopefully be fully recovered and ready for adoption soon.