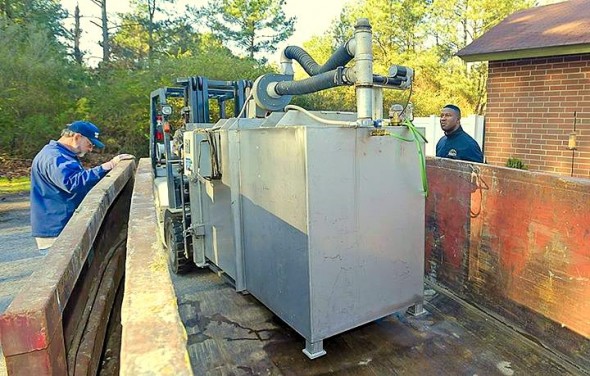 The Wilson County Animal Shelter in North Carolina has moved into the 21st century; though they stopped using it in October, they have finally hauled away their gas chamber.  Now they want to focus more strongly on spay and neuter programs.

Wilson County Sheriff Calvin Woodard says the county purchased the chamber years ago when he was still a deputy.

“I wish we never had to put any pet down at all,” he said.  “I love animals and it is a very difficult thing to do. And when using the gas chamber it is emotionally hard on the staff.”

He says it has always been hard to put animals in the chamber, and that they will now use lethal injection.

“Even when it was an animal that was so aggressive we couldn’t save it to adopt out, or those animals who were hurt and laying there on the road and brought here, it weighed hard and took emotional toll on us to put them in there,” Woodard explained. “And I want the staff to be comfortable and safe. But the biggest thing we want to do is get the animals into loving homes.”

Though they come in through the back door, the Sheriff says he wants to see them all leave through the front door.

“I wanted that gas chamber gone and thank God we eventually got to the place where we could get it picked up,” he said.

Though many improvements have been made to the shelter, he would like to see a total change.

“I would love to have a new animal shelter — it would be great for the community to come and visit animals in a place before they adopt them, better for the animals and good for our staff,” Woodard said in December 2013. “But the economy has been bad and commissioners can’t build a new shelter with no money.”

Some money was allocated to the shelter for some basic improvements, but the most important change that has occurred since 2013 is the spay and neuter program, which provides the service for free to low-income families.

“There are elderly people and hard-working people who don’t have enough money to get their pet spayed or neutered and this is a service to them,” Woodard said. “The only issue is that you have to take your pet to get it fixed — we don’t do that.”

Families interested in adopting can also have their new pet fixed free of charge.