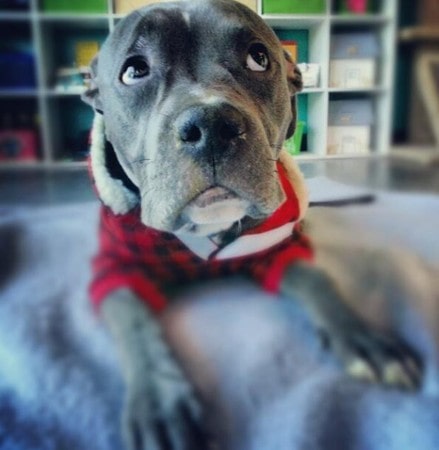 When Robin Johnson heard about what happened to Franco, the pit bull who was beaten by a group of teenagers, she knew she had to step in to help.  She donated a portion of the sales from her bakery to help with his medical care.

On March 21 an individual in a Blaine, Minnesota park, about 15 miles north of Minneapolis, observed and stopped a group of teens who were purportedly “punting the dog like a football.”  The person unfortunately did not report the incident to police, and the youths are still at large.

“It just made me so mad,” Johnson said.  “I wanted to do something to help the dog and hopefully bring those kids to justice.”

Rescue group Secondhand Hounds took in the Patterdale/American pit bull terrier – a pocket pit bull – and named him Franco.  A veterinarian examined him and determined that the dog had a mass in his abdomen, likely a bowel obstruction or internal injuries.  He also had Parvo, which had to be treated before surgery could be performed.  But Franco has not lost his vivacious spirit.

“What’s amazing is that after all he’s gone through, he’s a happy little guy, wagging his tail,” said Secondhand Hounds founder Rachel Brockway Mairose.  “He also loves kids, despite what these teenagers did to him.  I have a 3-year-old that he’s just crazy about, and the family that is fostering him has a 10-year-old.  He becomes so much more happy and animated anytime he’s around the kids.  It just makes you realize how horrible it is to take advantage of something so helpless and vulnerable.”

On Friday, Johnson made special Franco cupcakes at her bakery, Sweet Retreat Cupcake Boutique, to help defray the mounting costs of the mistreated dog’s medical treatment.  This is not the first time she’s used her business to raise awareness about the plight of animals; earlier this year she held a fundraiser for research on the slowly disappearing moose population.

“Helping out with something like this gives me a deeper purpose, I guess,” Johnson said.  “What’s important to me are children and animals.  Our moose fundraiser last month was really successful and this just tugged at my heartstrings.  I thought, ‘Why not do this again?’”

For 3.25 apiece, customers were able to purchase chocolate chip-packed chocolate cupcakes with vanilla buttercream frosting, ornamented with Franco’s lovable face.  Customers were lined up around the block to get their hands on some of the delectable desserts and to help Franco.  A dollar-fifty from each cupcake was donated to Secondhand Hounds.

In addition to bringing in a fair amount of money for Franco’s treatment, Johnson has also submitted an application to adopt the one-and-a-half-year-old dog.  The animal-lover already has three dogs and two cats, but her heart has room for one more.

“We’ll see what happens,” she said.  “I’m not sure how many applications they already have for him, but I would love to give him a good home.” 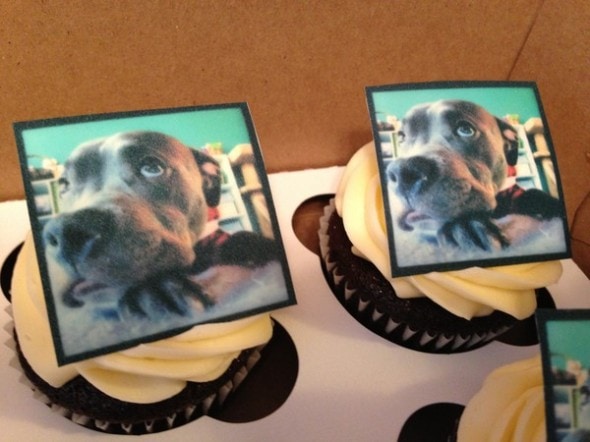