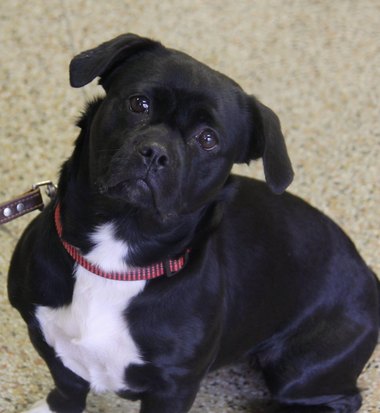 A woman in Michigan is alive and well thanks to Joleen, a dog she was fostering.  The two-year-old pug/beagle mix went for help when Mary-Louise Klatt had a heart attack.

Klatt is a volunteer with the Michigan Humane Society’s fostering program.  She took Joleen in temporarily, but had no idea how important she would become.

Earlier in March Klatt suffered a heart attack.  Joleen sensed the jeopardy her foster mom was in and began “barking and running back and forth.”  The commotion woke Klatt’s stepson, who immediately rushed to her aid.

“And she kept licking my face, trying to wake me up,” Klatt explained.  “She’s my angel!”

After she was treated and released from the hospital, Klatt knew that Joleen was meant to be a permanent family member.

“We always talk about how pets give back more than they take, but this is an even more dramatic example of how pets affect our lives,” said Jamahl Scott, MHS Volunteer Programs Manager.  “We are so glad Joleen was there when she was needed.”