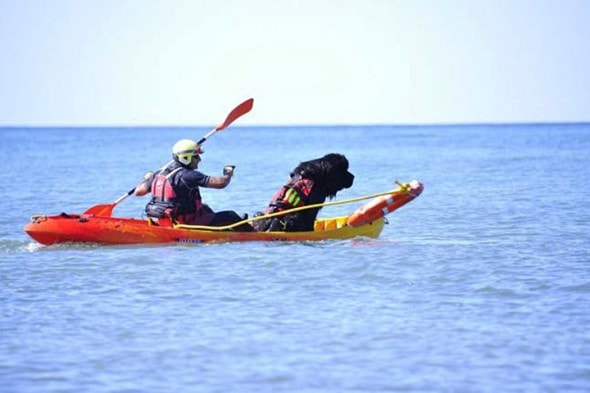 A tourist resort in Spain has decided to add a new member to it’s lifeguard and rescue team.  This time it’s not a tall, dark, handsome “Baywatch” type.  Well, he may have the dark and handsome thing down, but he’s not that tall, by most standards at least.  His name is Broun, and he has been brought on to assist in making sure the beaches of Spain are a safer place.

The resort is located in San Pedro del Pinatar, which is a bit of a hot spot for beach lovers, tourist and swimmers from all over.  Bruno’s owner David Alvarez was already employed at the beach as a lifeguard, when an idea struck.  Alvarez remembered what a great swimmer Bruno is, and decided to start bringing him to work.

“When I realized what a powerful swimmer he was, I did a test and found that he was able to pull plastic containers filled with water weighing one and a half tonnes to shore (about 3000 pounds!), and with his powerful webbed feet he can swim around 5 kilometers (slightly over three miles!), before he gets into difficulties,” said Alvarez.

Bruno is a Newfoundland and is a natural born swimmer.  He loves the beach, and especially swimming.  This breed typically has webbing in their paws making swimming a breeze, and they have two layers of fur to act as waterproofing.  In fact, the outer is almost as waterproof as duck feathers, and all of that fur adds up to an unmatched buoyancy which allows Bruno to have people in distress simply hang on, as he brings them to safety.

“I wasn’t sure if my employers (would) go for it but after trials they really love the idea!  Now I think they are planning on getting other lifeguard dogs,” Alvarez said.